Sir Richard Burton - No, Not That One 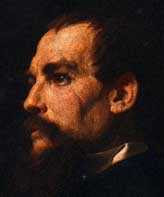 I read a biography of Sir Richard Francis Burton about a million years ago. My thought was that this was one wild and crazy guy. How’s this for some factoids:
Burton traveled throughout the Middle East dressed as an Arab in his role as an Orientalist, Ethnographer, Explorer, and Writer.
He traveled with John Speke into the wilds of Africa in search of the source of the Nile River. He was also sent by the Royal Geographical Society to explore East Africa and discovered Lake Tanganyika (well, the indigenous folks already knew it was there).
He spoke 29 European, Asian, and African languages.
He translated the most popular English-language version of the Kama Sutra of Vatsyayana.
He brought the Arabian Nights to the attention of the Western World by his collection and writing of the many stories told by Scheherazade.
Hey, it goes on and on. How he managed to stuff so much into one life is beyond me. I’m lucky if I explore the wilds of the local shopping mall.
Burton was born in 1841. He attended Trinity College at Oxford, but was permanently expelled for attending a steeplechase and insisting students should be able to do such things. He joined the army, becoming a Captain in the East India Company. He served in India, initiating his life-long love of the Orient. He had a talent for learning languages while in the army.
He asked for leave from the army to explore the Middle East and became very familiar with Muslim society by traveling as an Arab. Talk about dedication, he had himself circumcised to make his disguise complete.
I don’t have room enough here to give you a complete history of Burton’s travels and accomplishments. He lived his own life, causing no end of grief to the establishment.
I wanted to bring this amazing man, known as 'Ruffian Dick' to your attention and encourage you to read one of his many biographies or his autobiography (preferable) and delve into his other writings. I’m sure you’ll at least be intrigued enough to pick up a copy of the Kama Sutra or his translation of the Arabian Nights.
For the science fiction fans, you might recall him as a character in Philip Jose Farmer’s Riverworld series.
A decent article about him with a fairly comprehensive bibliography is available on the Free Dictionary site.
Much of his writing is available as free downloads. See this complete list of on-line resources.
Sir Richard Francis Burton died in 1890. As an obituary described: "...he was ill fitted to run in official harness, and he had a Byronic love of shocking people, of telling tales against himself that had no foundation in fact." Ouida reported that "Men at the FO [Foreign Office]... used to hint dark horrors about Burton, and certainly justly or unjustly he was disliked, feared and suspected... not for what he had done, but for what he was believed capable of doing..."