Reblog: What the Heck is a Simurgh? 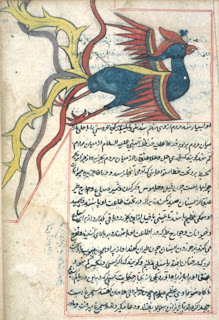 What is a Simurgh?
A recent review of "Quest for the Simurgh" by Clayton Bye asked the question. Now, I was definitely under the impression that everybody in the world knows what a simurgh is, but I guess I was wrong.
Anyway, if you’ve read the 1001 Arabian Nights or even saw the movie with John Leguizamo, you’ll be familiar with the intelligent Big Bird. From the Encyclopedia Mythica (my favorite source for all things mythic):

My Mashup
I pretty much stick to the traditional description here except for that dog head and lion claws thing. Considering that the Simurgh know everything (really, not like that annoying guy at work who just thinks he knows everything), then it seemed logical to me and my heroine Faiza to ask them where to find the missing magician.
The boys in the little band of rescuers scoff at her, but it all works out anyway. The search for the bird does get them into the mountains where they need to be to save the world from Armageddon. You’ll have to admit that is just a teensy bit more important then finding an old magician. It’s all good, though. The magician finds the kids and the birds.
A note on the cover of the book: At the top of this post is a real page on the Simurgh from a real Arabic text dating back to circa 900 AD. I don’t see any dog’s head or lion claws. Do you?

Email ThisBlogThis!Share to TwitterShare to FacebookShare to Pinterest
Labels: Myths and Legends, Quest for the Simurgh, Simurgh