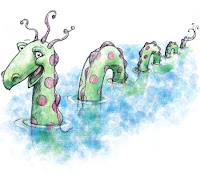 In my as yet to be published series about a teen witch who can't spell worth a damn, our erstwhile heroine gets a little help from an unusual source. Did you ever wonder why there are so few sightings of the Loch Ness monster? Well, Nessie vacations on Ultima Thule, which may be the remnants of Atlantis.

My Mashup from Land of the Midnight Oil (yet to be published)
Ceto and Nessie become one. She's not a bad, um, person, but much misunderstood. She finds my heroine adrift in the northern seas sitting on a block of ice. Oh, yeah, the ice block contains the body of her father. Ceto finds this all fascinating and helps my heroine dock the block at Ultima Thule and find a messenger to send for help from the Witches' Island of Galdorheim in the Barents Sea.