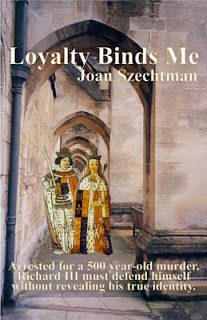 Loyalty Binds Me by Joan Szechtman
My rating: 4 of 5 stars

Richard III. What's the first thing that comes to mind? Drowning little boys in a vat of wine? A hunched back that makes dogs bark at him? Lie, cheat, steal his way to the throne of England?

I've got news for you. There's a whole Ricardian Society that defends Richard III claiming he's not the horrible person portrayed by Will Shakespeare.

Ms. Szechtman gives the readers Richard's side of the story with a lovely device. She has Richard transported into the 21st Century where he attempts to live like a normal man. Unfortunately for Richard, the statute of limitations on murder is forever. He finds himself arrested for the murder of the princes.

This is a spellbinding book. Very original idea and handled well both historically and as a speculative fiction.

I was lucky to get an advance copy of the book. I've discovered recently that Loyalty Binds Me is now aailable at the usual outlets.

I recommend it to readers of historical fiction and speculative fiction. It's a nice blend of both.


View all my reviews