Technomage
by Clayton Bye
Kindle Edition
4 Stars out of 5 * * * *
Mixing technology and magic to good effect. 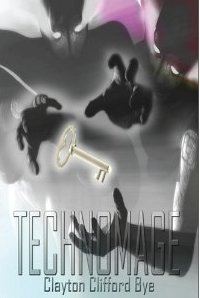 I read the previous book, Sorcerer's Key, and enjoyed it a lot. So when I found the sequel, I jumped right on it.

As stated in the book's description, it is an epic story, and I think it deserves to be epic length (well, maybe not that long, but I wouldn't mind 90K-100K). Anybody who's read my reviews will notice that my complaint is almost invariably: too many words. This is one of the rare instances where I want more, not less.

Jack Lightfoot is a mage like no other. He can easily bridge the gap between Earth and Eden, the former a technological world, and the latter a world of magic. The mage who can combine the best of both is fairly unbeatable, however, Satan has been unbeatable for a long, long time, so Jack is not equipped for the initial assault that kills his entire family and destroys his human body.

He becomes the "ghost in the machine" by escaping into the Google global network. He hangs out for some years hiding from Satan and his technomage minions and trying to find somebody out in the world who can help him defeat the devil. A very tall order, indeed. The assistance comes in the form of two characters. Victoria, a child genius, grows up to provide all the technical assistance Jack needs to fight the devil. Brim, a preacher/shaman, is the spiritual powerhouse Jack requires.

With the help of these two, Jack can fight the very devil and, if not destroy him, can at least stop Satan's play to control both Earth and Eden. Any more would be a spoiler, so I'll leave that to the reader to discover.

I would love to see a novel starring Victoria, the only person who understands Jack in his form as an electronic ghost. He's legend within the geek community, but the rest of the world pretty much ignores him. Victoria is the one who gives Jack the body he needs. Reverend Brim is his spiritual force. So, I'd also like more on Brim's background. How does a Native American minister of the gospel combine the One God with the gods of his culture to help Jack defeat the devil?

Well, you'll just have to read the book to find out. There's a hint of another book in the From Earth to Eden series. I hope Mr. Bye is working on it. He's got a fan out here waiting for more.

***
Note: I'm going to start post my reviews on my blog. I've usually only posted on Goodreads, Amazon, and the like. Why not share my wisdom (quit laughing) with my blog readers as well? Marva