SCOTCH BROOM: Book 3 of The Witches of Galdorheim (Kindle Edition)
A magical trip to Stonehenge lands a witch in the Otherworld where an ancient goddess is up to no good.

Researching Celtic mythology, I knew I wanted to use some of the lesser know magical creatures. I also decided that they needed to be “like” animals, but not quite. The reason for this is obvious to readers who’ve been following Kat’s story from the beginning. Kat’s magical ability is to talk with animals. She has greater or lesser success depending on the innate brain-power of a natural animal. For example, she chats along nicely with Salmon the Orca since a killer whale is the largest of the dolphins and are at the top of the IQ charts. I believe the ability to communicate to others shows greater intelligence. Sorry. Don’t want to offend any fish out there, but you guys just aren’t that bright. 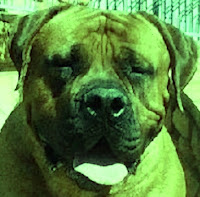 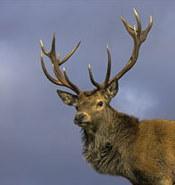 Kat glanced at the dog and saw that he stayed put. She didn’t know whether to keep watch on the mutt or try to do something to help Sianach. However, the stag was rapidly healing and soon seemed unharmed, except for the drying blood on his neck.

“What? How?” Kat stammered. But Sianach was not your average, everyday red deer; he was a creature of magic. It shouldn’t surprise her he couldn’t be killed.

Turning her attention back to the dog, she looked him over with interest. His shoulder was as tall as her own. The dog’s shaggy fur coat was a startling, and quite attractive, forest green, and he sported a long, braided tail. By the shape of his blocky head and the size of his jowls, Kat thought he must be a mastiff.

“Just what is going on here?” she asked, planting her fists on her hips and glaring at both creatures.

Sianach stepped toward Kat and pointed his rack toward the dog. “Our apologies, Kat. We did not mean to frighten you.”

Kat looked back and forth at the two legendary beings. She closed her mouth when she realized she’d been gaping. “You scared the stuffing out of me!”

“I would not want to do that. I imagine you need your stuffing. Meet my good friend, Cusith. Cusith, this is Kat, a witch from a far off land.”

“I would not have harmed you,” Cusith said. Kat took his paw and shook it.

Kat shrugged off the scare and nodded to the big dog. “I’m pleased to meet you, Cusith?”

“Pleased to meet you, young witch.”

Sianach said, “We’ve been good friends for years. Since neither of us have any of our own kind to match ourselves against, we fight with each other for practice. All in good fun, naturally.”

Both hound and stag broke out in laughter. Cusith with woofs coming up from deep in his chest. Sianach with a weird combination between a snort and a bugle.

“I am truly sorry. I assumed you’d know the creatures of the magic realm cannot slay each other; only an outsider can kill us.”

“Well, I didn’t know,” Kat replied grumpily. But then she tried to laugh with them. Why not? Everybody was fine, and she learned something new about how the Otherworld worked. She briefly considered asking whether an Otherworld creature could kill an outsider. Sianach began to tell Cusith of their quest, and the thought disappeared as she filled in details. The giant dog nodded. “Aye, I could help. After all, my nose is much better than either of yours. I can probably pick up the scent of the Trow Hall from several miles away.”

“I’d love to have you come along, Cusith. I’d never realized there was so much more to the Highlands than beautiful scenery.” Kat loosened her tense muscles, relieved the dog was friendly and could be a big help in the search.