SCOTCH BROOM: Book 3 of The Witches of Galdorheim (Kindle Edition)
A magical trip to Stonehenge lands a witch in the Otherworld where an ancient goddess is up to no good.


﻿﻿From the Encyclopedia Mythica:


Sidhe (pronounced 'shee') literally means "people of the (fairy) hills". It is the Gaelic name for the fairies in both Ireland and the Highlands of Scotland. Usually these fairies are attracted to those who are beautiful as well as wealthy. 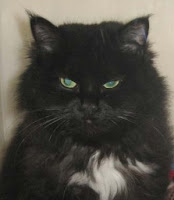 ﻿﻿Many many, many, many writers are in love with the Celtic myths. I’ve delved into them, too. However, I’m not a big fan of the flitty little cute faeries (or fae or fairies). In Celtic mythology, there’s a fairy (or fae or faerie) for just about any purpose. The “serious” fantasies love the idea of the fairy troupe. More than a few equate fairies to Arthurian legends, many specifically to Merlin.

Scotch Broom, is set in the Scottish Highlands, or, rather, the Otherworld which is another dimension that exists within the Flow Country. Of course, I had to include at least one fairy in the mix or I’d be violating some unwritten fantasy rule.

Anyway, I found a particular sidhe I liked. She’s a big black cat with a white chest. Aha! I happen to have the model for said cat (in a much reduced size) sitting at my door every morning demanding a handout. We call her Bitch Kitty. Yes, she has attitude in spades. So, there’s my model for Cait Sidhe, a companion to my erstwhile heroine, Kat.


Kat has already found two companions: Sianach a stag and Cusith (another sidhe) a giant, green hound. They’re tromping through the swamps trying to find the Trow King’s hall in the middle of the Otherworld (the alternate magic world in the Scottish Highlands).

Although it looked much like a normal house cat, standing Cait Sidhe would reach Kat’s knee. The cat had to weigh in at thirty pounds or more. Both Sianach and Cusith were of the extra-large size, so she wasn’t too surprised.

Kat stood and moved closer to the cat. “Hello. I’m Kat, a witch from Galdorheim. I’m pleased to meet you.” She resisted the urge to scratch behind the cat’s ear. She had a feeling she might end up with severe lacerations.

“I didn’t quite catch your, um, last name. How do you spell it?”

Kat gritted her teeth at the cat’s rude answer but decided to stay calm. “Is that sidhe as in faery?”

The cat quit licking and looked at Kat with penetrating yellow eyes. Curling her lip, she exposed gleaming fangs. “The pronunciation varies, depending on where one is. Sidhe is shee in Ireland and sith in Scotland. We are in the Scottish section of the Otherworld, thus sith is proper.” Cait licked her right paw and swiped it over her ear. “Personally, I prefer shee since it is more commonly used. Nobody seems to say sith anymore.” She tipped her head in Cusith’s direction. “Except that dog, of course.”
“Um, okay. That’s interesting. Are you friends with Cusith and Sianach?” Kat asked.

“Not even.” Cait Sidhe glanced at Cusith. “Cusith is a mutt, or dog, if you will. And I am a cat. We do what cats and dogs do, but we are not friends. Sianach, well, as a meat eater, I see Sianach as lunch.”
“Oh, sorry. I just assumed since you know each other—”

“Do not assume anything in the Otherworld.” Cait Sidhe examined Kat. “What are you doing wandering around in the magical realm? Witches generally stay in the mundane world.”

“Oh, I’m looking for King Connor’s hall. I have messages, or I guess I should say I had messages. Someone stole them and took my map to the hall. Now, I just hope he can get me out of the Otherworld in one piece.”

“I see. Well, I have nothing better to do today, so I’ll come with you.”

“I do. However, my path to the Hall isn’t one you can follow.” The cat raised her head and looked around. “Maybe I can find an alternate way. After all, I am a hunter, therefore I hunt.”

“Makes sense,” Kat replied, a little doubtful of the cat’s word. She had the same sense about Sianach’s reasons for helping her. A private matter, he had said. The cat didn’t give any reason at all. Should she trust Cusith? He seemed to be Sianach’s good friend, so that might be his only motive for coming along on the trip. It troubled her she could not delve into the minds of any of them.