Blog Tour Over and Out

However, I've got a couple of September bookings already. Some folks will visit me here on my blog, and I'll visit on others. I'll get the September schedule posted on the right sidebar soon. 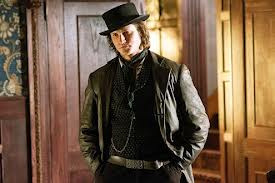 In random newsiness: I watch the premiere Doctor Who for this segment of the 7.1 season. You just never know when they'll be tossing in a special or whatever. I think I'll keep a closer eye on the BBC America TV schedule because a few of the advertised shows look intriguing.

A brand new one, "Copper," will definitely be on my must watch list. Not SF or F, but a lovely western-eastern-Irish amalgamation. If you saw "Gangs of New York," you get an idea of the setting. The Five Points area of New York grew to be an Irish enclave. Definitely the mean streets of NY. "Copper" is set in 1864, smack in the middle of the Civil War. Half the characters have Irish accents, so we're getting the best of all worlds. The hero, Kevin Corcoran, just released from the army, is a detective (plainclothes) and definitely hot. I watched the first two episodes and want to go back for more.

The whole setting is just ripe for steampunky goodness. A black man named Freeman is a self-taught forensic pathologist. Of course, the regular police have no use for him, but Corky recognizes the value of someone who can do an autopsy to discover more than the cursory look-see the body will receive from a doctor. As one reviewer noted, this is kind of a CSI: Five Points. So far, I'm loving it. For you ladies, there are some naked males to ogle. Who said the British are staid?