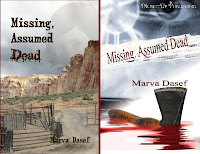 I didn't want to let the Judge rant on about his prejudices, so I'm covering for him. This is one mean, nasty old man. But one soft spot in his heart does him in.

In "Missing, Assumed Dead," a self-proclaimed 'judge' runs a small Justice Court (really only traffic court) in a tiny town in Southeast Oregon. He has appointed his nephew, George Leiper, de facto town police chief. Of  course, there is no police department, but George loves to wear the uniform and enjoy the comforts of his own office in the City Hall.

Nobody cares to oppose the Judge as long as he keeps his connection to the White Power groups away from Roseword.

But that's not always the case. He brings the darkness of the Aryan Brotherhood right to the town's front door when he forces his daughter, Miranda, to marry one of the brotherhood, Cole Bristow. Mostly, the Judge want to get his daughter away from a Basque shepherd, Salvadore. When Salvadore disappears mysteriously, the town whispers behind closed doors, but don't dare cross the Judge with his connections to the White Power group.

Soon after bearing her daughter, Mirabel, Miranda commits suicide rather than remain married to Cole. The whole town worries, but fear keeps the secrets hidden.

The judge becomes the guardian of his granddaughter, but keeps her away from the rest of the town. Even her uncle admits that she's not right in the head. Something happened to her around the time that Salvadore disappeared. What happened to Salvadore, and why is Mirabel insane? Is the Basque shepherd her father rather than Cole, Miranda's husband?

Prejudice, murder, insanity, suicide: Every small town has its secrets. Find out what those shocking secrets reveal in "Missing, Assumed Dead."

Here's an excerpt from the book that tells you a little about Judge Leiper.

The next morning, George drove up to the Vasco place. He didn’t see anything suspicious but wrote a note for Salvadore to contact him. When he hadn’t heard two days later, he went back. The note was still on the door. He walked around the shack but didn’t see anything except Salvadore’s walking stick, the shepherd’s crook, leaning against the tool shed door. He looked inside, but nothing seemed amiss.

Vasco rarely went anywhere without that stick. George went back to town, worried something might have happened to the old man. He decided to tell his uncle about it. As a Justice of the Peace, he had close contacts with the Sheriff’s Office.

“That’s what I found, Uncle, um, Judge. I think the old man mighta wandered off and got lost.”

Judge Leiper stared at his nephew with watery eyes, then pulled a big, white handkerchief from his suit pocket. He wiped the sweat from his pasty face, nearly as pale as the cloth.

“Don’t think there’s need to worry. He’s a tough old guy and knows those hills like the back of his hand.”

George hesitated to speak up to the judge, but he had to do his duty. “I’ll contact the sheriff and see if I can get them to come out to search for him.”

Narrowing his beady eyes, the judge’s voice went from friendly to mean. “Now, you don’t want to be bothering the sheriff. I said not to worry. I’ll take care of it.”

The judge waved his hand at George. “Now you just forget about it. I’ll take care of it.”