When I earned my degree in Computer Science, and got my first job as a systems analyst at a major software company in Seattle, I figured all I had to do is keep my eyes peeled for Mr. Right. Not that I was in any rush to get married, but I didn't want to miss something good while I was busy building my career.

Just one minor little detail. Well, make that two. Dad died. That just about killed me. He was always my best bud. Mom and I soldiered on, though. Then Mom started feeling bad, really weak. The doctor diagnosed her with multiple sclerosis. She got treatments, but MS doesn't have a cure. So she got weaker and weaker until she couldn't walk around anymore. She went from a cane to a walker to a wheelchair. But she kept herself busy with geneaology. I don't see the appeal myself, but it makes her happy.

Any thoughts of even getting a date went out the door. Don't get me wrong. I love my mom and don't resent a single second of the time I spend taking care of her. After all, she took care of me and sacrificed a lot to get me through college.

Then I got the letter. Talk about weird. Some guy I'd never heard of disappeared seven years ago, and he was declared dead. Strange enough, but even stranger, I was named as the executor of his estate.

I wanted to shuck it off, but Mom told me the man was related to my father. Seventh cousin, twice removed or something like that. She said I had to go. She wanted anything having to do with the family, you know, photos, birth records, stuff like that.

So there I was, driving through the gawdawful foresaken wilds of eastern Oregon, trying to find some bump in the road town called Rosewood. Of course, I got lost. Who wouldn't? Every chunk of scraggly sagebrush looks like the next, and they don't seem big on road signs.

Lucky for me, a Deputy Sheriff found me sitting out in the middle of nowhere. We had a minor little disagreement at first. He wanted to shoot me. But I forgave him for that when I looked into those baby blues. Ahem. Right.


The sky had turned a deeper blue as the sun continued its trip behind the mountain ridge. The shadows lengthened on the east side of the scraggly shrubs. The faint hum of a car engine drew her eyes southward. “Good, I could use some directions.” But she was alone on an otherwise empty road. Maybe the approaching vehicle held a friendly soul, but it could just as well carry a serial killer.

Using her shirttail as a hot pad, she gingerly took hold of the door handle again and climbed back into the car. Goose bumps rose on her arms when the still blasting air conditioning hit them. She turned on the emergency flashers then opened the glove box, looking for something to use as a weapon. “Ah ha!” Kam pulled out a two-inch canister. “Pepper spray? Crap, just hair spray, but that shit burns eyes. Better than nothing.” She tucked it between her right thigh and the console to hide it from view, her finger ready on the button.

The vehicle grew larger and revealed itself to be a Ford Expedition SUV painted Oregon green. The lights on its roof flashed blue and red for a moment then went off. “A cop. Excellent.” On the other hand, she’d heard of guys who decked out their rides to look like cop cars.

The SUV pulled up behind her and stopped. After a long pause, the door opened. A man in khaki climbed out and walked forward. He stopped behind the car and wrote something, probably the plate number, on a pad. Aviator glasses hid his eyes, but the rest of him looked pretty good. Tall. Well, maybe not too tall. Slim and dark, just how Kam liked them. Watching him approach, she wondered idly how he managed to keep the razor-sharp creases in his uniform in this heat.

When he reached her side window, he gestured for her to roll it down. Kam cracked the window a couple of inches. She noted the badge and the Smokey Bear hat. “I don’t think I was speeding, Officer.”

The man chuckled, showing fine smile lines at the corners of his full mouth. He had great teeth. “No, you weren’t, but I wondered if you might be lost. A lot of people get themselves turned around out here.”

Kam gave him a rueful grin. “Yeah, lost isn’t the half of it. I’m looking for Cork Hill Road.” She hoped he was the real deal, but she sure as hell wasn’t opening her door. Tin badges were easy to buy on eBay.

“Sure.” She opened the center console and pulled out the papers with her left hand, then shoved the rental agreement through the two-inch opening. She couldn’t figure out how to extract her license out of her purse without letting go of the spray.

“Why don’t you just direct me to Cork Hill, or if that’s too hard, how about Rosewood.”

“I’d be happy to, miss, but I really do need to see your license. Paperwork, you understand.”

Kam released a deep breath breath. She stretched her arm across her body trying to reach her purse on the other seat. She grabbed the strap and pulled it toward her. It slipped out of her left hand. She automatically lifted her right to grab it. “Shit!”

Instantly, the officer’s manner changed. The smile disappeared, and he took a step back, pulling his gun from his left-handed holster. “Drop the canister out the window,” he ordered. “Do it now.”

Kam squeaked and threw her hands up. The canister flipped out of her hand and flew at the windshield. It bounced back and landed in her lap. “Now what?”

“Pick it up and push it out the window. Slowly.”

“You already said that.” She picked up the spray with two fingers and dropped it out the window. “Hey, I don’t know if you’re a real policeman. Anyone can play cops and robbers.”

“Please step out of the car. Use only your left hand to unlatch the door and keep your right hand where I can see it.” The barrel of his pistol never wavered from her torso.

“Take it easy. I’m opening the door.” He stood outside the reach of the door’s swing. Kam decided she’d rather fight outside the car, than be shot inside it. She got out with her hands still raised.

“Now move to the rear of the vehicle,” he ordered. When Kam obeyed, he took a step forward, never taking his eyes off her, knelt, and picked up the canister. Straightening, he glanced down at the canister then back to her. The corner of his mouth twitched as he re-holstered his pistol. “Sorry, but…hairspray?” He took off the aviators and smiled. 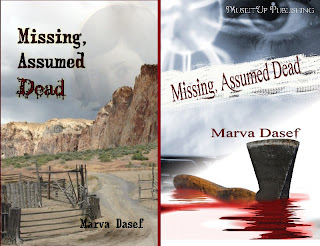