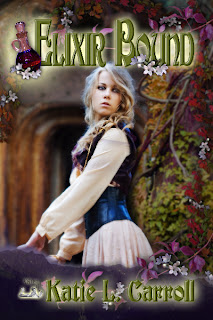 Thanks so much for having me on your blog, Marva! I hope you don’t mind I’m sharing some of my illegal writing practices with your readers.

Elixir Bound takes place in the made-up world of the Greater Peninsula, more specifically in the purely imaginary Faway Forest. You might think it takes a lot of work and time to create an entire world from scratch. It’s not like any of us are J.R.R. Tolkien (who—if you don’t know—was the ultimate master of world building, creating languages, mythologies, and entire book-length documents for his fictional Middle-earth).

I’ll let you in on a secret (c’mon, get in real close so I can whisper): It’s not so hard when you steal your ideas! I know, I know, stealing is wrong. I’m not talking grand theft auto here. I’m talking about mining your own life for inspiration. Take what you know and your experiences, put your own personal spin on them, and bring them to your made-up world. Still have no idea what I mean…okay, how about an example?

Growing up I used to hike on a mountain called Sleeping Giant, so named because it looks like a giant laying on his back. It’s a great hiking spot for families because it has a large stroller-friendly path that leads to a castle, as well as more difficult paths for the older kids. It’s not very big (although I have managed to get pretty lost on it) and makes for a great day trip.

Wouldn’t you know there just happens to be a very important mountain range in Elixir Bound called The Sleeping Giant (very original name, huh?) that looks like a giant laying on his back. The Sleeping Giant is where Katora must travel in order to retrieve the Elixir’s secret ingredient. It’s much larger and way more dangerous than the mountain range of my youth and has a very interesting story behind its creation (that I did actually make up myself), but it’s very similar in its most prominent feature.

Readers who don’t know about the real Sleeping Giant might think I’m a very clever author to think of such a thing as a mountain that looks like a giant. They don’t know my dirty little secret: I stole the idea from my own life! Please feel free to steal my idea of stealing ideas in your own writing.

Katora Kase is next in line to take over as guardian to a secret and powerful healing Elixir. Now she must journey into the wilds of Faway Forest to find the ingredient that gives the Elixir its potency. Even though she has her sister and brother, an old family friend, and the handsome son of a mapmaker as companions, she feels alone.

For it is her decision alone whether or not to bind herself to the Elixir to serve and protect it until it chooses a new guardian. The forest hosts many dangers, including wicked beings who will stop at nothing to gain power, but the biggest danger Katora may face is whether or not to open up her heart to love.

Elixir Bound is available at the MuseItUp Publishing bookstore, Amazon, and other e-book retailers.

Pop recounted how years of careful research and investigation by Luths’ wife and sons allowed them to uncover all the ingredients of the vial. The family continued to experiment with it until it became the powerful healing Elixir they currently possessed. The tale enchanted Katora; she knew so little about the Elixir.

A kick from under the table startled Katora. She almost swore out loud. She glared at Bhar, the source of the kick, and he gestured toward Hirsten. Katora had forgotten to observe him. Hirsten’s gaze fixed on Pop and he quietly hummed to himself. He turned to pick up his glass and the humming stopped. Katora looked away, not at all sure what to make of that. Pop continued talking.

Pop pulled the same blue vial he had given to Katora earlier in the day from his breast pocket and held it up. It sparkled in the candlelight, painting little rainbows of color on the walls. Katora had unknowingly taken a taste of the Elixir. Her stomach lurched with guilt at the memory of a single, thoughtless, wasted drop. Her eyes followed the tiny container when Pop continued.

“This is the very same vial Luths stole. I don’t think Yeselda ever realized how powerful the Elixir would become. Now it belongs to the Kase family, and we protect it from falling into the hands of evil.”

Katie L. Carroll began writing after her 16-year-old sister unexpectedly passed away. Writing was a way for Katie to help her sister live on in the pages of a story. It also made her realize that she wanted to pursue writing as a career. In addition to penning novels for teens and kids, she edits puzzle magazines, plays soccer, and collects signed copies of books. Katie lives in Connecticut with her husband and son. To learn more about Katie, to read her blog, or to contact her, visit her website at www.katielcarroll.com.