I belong to Groupon, an on-line coupon service. I've bought quite a few coupons for half-price meals through it. It's a great way to get to know eateries around your town, without paying full freight. 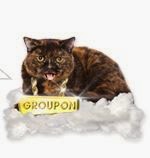 Anyhow, Groupon always has something interesting in a section on every page titled "Groupon Says." These are hilarious for the most part and I'll pop over to look at coupons I don't even want just to read this little article.

Due credit to Groupon and whoever writes the column. I thought this particular column apropos to my author visitors.

The Groupon Guide to: Writing an Urban Legend

Everyone secretly wants to believe in scary stories that might be true. Indulge your friends' gullibility with these tips to crafting the perfect urban legend:

• Make sure the story takes place somewhere nearby, on a similar night—ideally exactly 100 years ago to the night. Or on the devil’s birthday.

• Always include an animal that turns out to be a different animal or an animal where one does not belong—like a dog that is actually a rat, or an alligator in the bathroom of the Museum of Alligator Safety.

• Tweak the details—it's only a few letters’ difference to change "gardener" to "murderer," and only a small white lie to change "was valued by the community" to "possessed double hook hands and a thirst for marrow."

• Always carry "proof"—this can be a monster's tooth carved from soap, a faded newspaper article created in Photoshop, or a scrap of the victim's clothing that is actually just a scrap of clothing you ripped off a terrified hiker you chased through the woods.