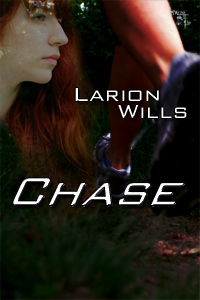 CHASE
by Larion Wills
Despite the threat of prison or death, Chase had to know, did he have a child or had Tiffany lied again.

Eighteen and in deep trouble, Chase is given a choice, keep his mouth shut about the beating they gave him and leave town or go to prison for rape. Twelve years later he can’t leave the doubt alone. Was Tiffany pregnant? Discovering Tiffany didn’t lie, at least that time, he returned. Suffering the lengths they went to be rid of him, he knows what they’d do if they saw him. Only wanting to see the boy, from a distance, not cause trouble, he never expecting to be allowed anywhere near the child. He gets a startling invitation to stay with disturbing results. Tiffany disappeared years before, both her parents are dead, all three under suspicious circumstances. The lone family survivor, Tiffany’s younger sister, inherited the family fortune and his son. Grateful to Sydney for the care she gives Ryan, fascinated by her, he can’t help seeing something is not right even before he’s told were there enough evidence, she’d be on trial for murder.


My guest today is the double-named Ms. Wills. She writes a variety of genres, so uses a different name to differentiate them. I think you can pronounce the names more or less the same. Now on to the Q&A:

(Q) Hi Larriane aka Larion! Thank you for joining us today. Before we begin, please tell our readers where they can find you.

I also write a blog appearing on the first of each month at: All Day/All Night writing Divas where you can never tell what will happen with other authors showing up on their days.

Amazon is a good all in one place for all of my books as they’re a bit scattered with different publishers.

For the book I’m going to tell you about today, you can go straight to the publisher: MuseItUp Publishing

(Q) You write multiple genres. Where do the concepts for your variety of books come from?

Ummm, I wonder how many authors are asked that question and have a brain freeze when it comes to answering. Please don’t tell me I’m the only one. Sometimes I can answer. A phrase pops into my head or incidence occurs that set a story off. Other times an idea kind of stews around and connects with other ideas floating around in there. In many I include several aspects of something I’ve experienced or observed, but they became background, not the main story.

One day while driving and thinking about Halloween, the sentence “It was my birthday,” popped into my head. From where? I have no idea, but Evil Reflection evolved from it. It’s Still Tomorrow was the result of a trilogy I enjoyed reading so much, I wanted to create my own story of a witch with a sense of humor while adding in suspense.

The westerns? You can probably blame Louis for those, along with living in a history rich area of Arizona. The country around here is the home base for many of my stories, western and contemporary.

Science fiction? Hey, you’re hearing from someone who never missed Star Trek, Star Wars, Stargate—is it beginning to sound like my head full of stars? I won’t even try to list the books I read in that genre. Space travel, time travel, even travel between dimensions has always fascinated me. My first published effort with space ship is Looking Glass Portal. You’ll have to read it and decide for yourself if it actually involved space travel.

As for fantasy, I could tell you I was lazy and didn’t want to research to write a period piece, but the truth is, this world’s history didn’t fit with the story running around in my head. The solution, of course, was to create a world of my own. If you read The Knowing, (mine, not the one made into a movie—they took my title) you may recognize some similarities to our world only.

For Chase, I truly do not remember what started that particular story. Maybe one of the times I caught myself counting the handfuls of spilled cereal and telling myself, no one, including me, cared how many handfuls it took to gather it up but still I kept counting. I’ve often wondered how frustrating it must be for someone with OCD, obsessive/compulsive/disorder to watch while their hands keep doing something no matter how many times their head tells them to stop.

Being me, I had to mix in a bit of suspense. If they were threatened, how would they cope with it? How would they interact with others? Oh, and who could react well or badly with them?

(Q) What inspires you?

Inspiration-or ideas-can come from anywhere. As for the original question, when I read, I find myself wondering a well, where every did he or she get the idea for this story? I’m impressed and awed at times with detail and complexity and find myself wishing I could write a story like that. Perhaps that’s the real inspiration, or at least a catalyst, to sit down and start writing, dragging out details buried in the subconscious of observations, researching to be sure the details are accurate, fitting them together like a giant jigsaw puzzle to turn them into something enjoyable for others to read. I’ve had other authors tell me they nearly ran off the road when a piece they’d been trying to find the right place for finally fit. Others, more than I can count, have talked about being unable to sleep for the bits swirling around waiting to be grabbed and slid into place or for that one little bridge to make them fit.

(Q) What advice can you give to writers, both unpublished and published?

Another question I’m often asked is ‘How can I become a better writer?’ I’m going to paraphrase a quote from a man whose name nearly everyone recognizes even if they don’t read his writing, Stephen King. ‘Read everything you can read and write, write, write.’ Although I don’t agree or practice his style of writing, a nine to five type, that one phrase stuck with me after reading his book, Stephen King on Writing. Everything you read teaches you on a subliminal level, ‘ugh, that stinks’ or ‘oh, wow, I wish I could write like that.’ Everything you write is practice. Then, of course, you have to edit. I don’t care how good you are, it’s never perfect. I’ve said it before, I’ll say it again, and keep on saying it; edit is not a dirty word. Every time you edit you’re getting a grammar, punctuation, and composition lesson. Learn from them. That’s an order I give myself and attempt to pass on.

(Q) How about an excerpt from Chase to pique readers' interest.

Despite the threat of prison or death, Chase had to know, did he have a child or had Tiffany lied again.

Eighteen and in deep trouble, Chase is given a choice, keep his mouth shut about the beating they gave him and leave town or go to prison for rape. Twelve years later he can’t leave the doubt alone. Was Tiffany pregnant? Discovering Tiffany didn’t lie, at least that time, he returned. Suffering the lengths they went to be rid of him, he knows what they’d do if they saw him. Only wanting to see the boy, from a distance, not cause trouble, he never expected to be allowed anywhere near the child. He gets a startling invitation to stay with disturbing results. Tiffany disappeared years before, both her parents are dead, all three under suspicious circumstances. The lone family survivor, Tiffany’s younger sister, inherited the family fortune and his son. Grateful to Sydney for the care she gives Ryan, fascinated by her, he can’t help seeing something is not right even before he’s told were there enough evidence, she’d be on trial for murder.

Billmore gave a snort. “Getting involved with her is not a good idea, Ryan. She’s a worse mess than Tiffany ever was. Between the school, things like football, and church, we all keep a pretty tight monitor on that kid of yours. She takes good care of him for whatever her reasons.”

“If you knew her better, you wouldn’t think it’s so farfetched. She gets an idea in her head, and she never lets it go. As long as she stays on her meds and doesn’t feel threatened, she seems to be okay.” He hesitated, took a breath and spoke with determination. “I could never prove a thing, but my advice to you is do not do anything to set her off and get out of here before she decides either you’re a threat to her in some way or she isn’t going to get what she wants out of you.”

“What are you talking about?”

“I don’t want any more unexplained disappearances or deaths. I can’t prove she had anything to do with Tiffany’s disappearance or her parents’ accident, but my gut tells me she did.”

“Tiffany called the other night.”

Billmore scoffed. “Right, I played that game with her for awhile. Wasn’t anyone on the other end, right? Ask her sometime to show you how the phone program on her computer works and can be set to dial a number any time.”

He gave a good spit. “Nearest we could figure was she and Tiffany got into it over the baby. Sydney wanted it, and Tiffany wouldn’t let her have it. They were screaming bloody murder over it one night, and the next Tiffany disappeared.”

“No, but Sydney is, crazy, smart, and tricky. Her father kicked her out because he was afraid to have her in his house anymore. She had the kid so things went along pretty good until she went back, demanding money from him when she’d tapped out the trust fund from her grandmother. Cain was strapped and couldn’t come up with what she wanted. He called me after she left, scared out of his skull. She threatened to kill both of them, and guess what, two days later they were both dead. Tiffany disappeared years before, presumed dead by everyone around here, both parents end up dead, the order of their deaths a little too convenient, and who’s left to inherit it all?”