Black Friday Weekend: Bad Spelling on sale for only $3.99 at MuseItUp Publishing.

Previously, Rune's old west town had disappeared entirely and he was left stranded on the glacier. Not only that, but the gate into Galdorheim village had disappeared. Rune was definitely in a desperate situation.

He stood, taking a few deep breaths to remind him he was still human, then he quit breathing. His heart stopped beating, blood slowed in his veins. The vampire fever crept into his mind. When he looked up, his flashing red eyes caught sight of the protective bubble. The glimmer of the gate drew his gaze. He swallowed and licked his lips. He leapt toward the gate at inhuman speed, for that was what he was. The vampire reached deep into the legendary past of his species and grabbed hold of an ancient breed, the Fire Vampire of Fthaggua. His body changed to a ball of lightning. The boy who quivered inside this new form whimpered. His last thought was that he loved his mother and hoped she could save him. 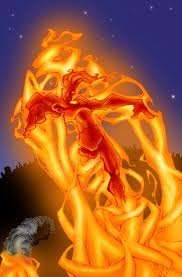 This not-Rune creature smashed through the gate and it exploded into flames. He heard a scream and whipped his fiery form toward the sound. He saw only a deep red splotch of light, all else dark except his prey. Blood lust rose up and electricity surged through him. A lightning bolt jetted toward his prey, ready to engulf it and feed from its life force.

The bright white light of his victim separated into three forms, purple, blue, and green. The colors surrounded him and closed in. The hunter became the prey. A boom sounded as the three forms hit Rune at once. Thunder shook the earth, and the flash of multicolored lightning hit him, knocking his fireball to one side. He bent himself like a Beckham soccer ball and splashed down in Lilac’s koi pond next to the rosebush. Rune felt himself cool and his flames dissipate. His vision went black as he lost consciousness.

Rune slitted his eyes. He lay in his mother’s arms tightly wrapped in a blanket. Aunt Thordis hovered nearby. His sister’s white face bounced around like a balloon. The healing witch, Glinda, had laid her hands on him and murmured spells. He opened his eyes fully.

Ardyth, his mother, held him closer and wept. Glinda drew back, then stood. “He’ll be fine now.”

The healer moved out of his sight, while Thordis floated nearer. “What happened?” Rune gazed at Thordis. “Your magic quit, then all my magic left. I don’t know why.”

Thordis’s face turned away and she muttered something to someone he couldn’t see. Rune pulled his hand out of the blankets swaddling him and touched his teeth. He was relieved that his canines were back to normal.

“Let the boy up, Ardyth. He’ll be fine.” His mother loosened her hold and Rune sat up.

He touched his head again; it hurt like somebody had laid into him with a frying pan. “I saw the lights. Thordis’s purple, mom’s blue. Who has the orange aura?”

Thordis snorted, then heaved a sigh. “Mordita. She was closest to the gate, so I called on her.”

“You can do that later. She went back home right away. You know how she is—a loner.”

Thordis moved to the fireplace in his mother’s home, then faced him. “Where were you exactly when your powers left you?”

Rune thought for a moment, trying to picture where the town had been before it melted away. “I was near the ice cave.”

Thordis glanced at Ardyth who raised her hand to her mouth. She turned back to Rune. “Ah! Well, that explains it then. The ice cave tends to pull the magic right out of a person. The only one who can go there is Kat. She wouldn’t notice whether her magic went away or not.”

“Gee, thanks Aunt Thordis,” Kat said, not attempting to hide the sarcasm. “It’s not my fault if I can’t spell worth a darn.” Kat stomped to the hearth and plopped down with crossed arms.

Rune struggled to his feet, holding the blanket wrapped around his waist. His clothes had disappeared, probably burned to ashes when he’d changed into the Fire Vampire. “Please don’t talk to Kat like that. She can’t help that her magic sucks. You know she’s got plenty.”

“True. But it’d be nice if she could actually do something with it.” Thordis glanced toward her niece. “Sorry. Not your fault.” Rune didn’t think his aunt sounded very sincere.

“I’d like to get dressed now.” Rune headed toward his bedroom, then stopped at the door. “Why couldn’t you tell I was lost out there?”

Thordis’s cheeks turned pink. “I got, ah, busy, but I was going to check on you when the magic booster ran out.”

Rune shook his head. He’d grown up about five years in the last hour. He now knew he could depend only on his own resources. He vowed to double or triple his training to enhance and control his warlock magic. And, more importantly, keep his vampire side in check. No more kid games for him. It was definitely time to get serious about magic.

I hope you enjoyed all four parts of this story. Remember, leave a comment on any of the parts to win a free copy of BAD SPELLING.