Even though I'm not Nano-ing this year, I'm still full of opinions. Matter of fact, a whole lot of writers are giving out tips this month on The Writers Rainbow blog. There's a new tip posted every day.

As you can see from this badge, the last time I actually completed my Nanowrimo task (50,000 words in one month) was way back in 2006. I've tried a couple of other years and failed for various reasons (I'm sure they were perfectly good reasons).

My one WINNER became a teen adventure novella, "Eagle Quest." Set in the Klamath Wildlife Preserves in southern Oregon, a group of teens hike into the Eagle nesting site at Bear Lake Preserve, only to run into more than one danger, plus several shady characters.

The Kindle edition is only 99 cents on Amazon. The paperback is still a bargain for $6.49 on Amazon.

My Tip for Writers's Rainbow is still preserved in the final book (which is now much shorter than 50K). Since it's a self-pub (ahem, INDEPENDENT PUBLISHER TALKING HERE), the cover is pretty basic. I don't believe in spending money for covers and typesetting. I'm a DIY self-pubber; no vanity presses for me. I don't pay anybody for anything I can do myself (with the help of some terrific crit partners catching my typos). 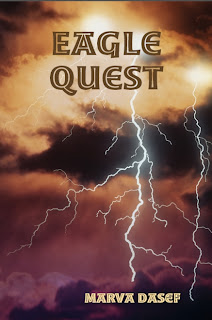 Email ThisBlogThis!Share to TwitterShare to FacebookShare to Pinterest
Labels: NaNoWriMo