Melisse writes Steampunk Romance (duh!). Here are her reasons why you should read Steampunk. By the way, I'm becoming a steampunk fan, partly because of the Firefly, which isn't 19th C., but is so steampunky in tone. I'll really happy to have Melisse on-blog today.

1 Victorian clothes are so cool.
2 It is the only genre that might pair a governess with a Space captain.
3 You are a secret Browncoat.
4 The Mad Scientist might be the nerdy but hawt hero.
5 Robots and Flying machines abound.
6 Fine hand-embroidered undergarments add a nice touch to love scenes.
7 Your Gallant Hero might pack a laser gun.
8 You enjoy grand adventure in your romance.
9 You secretly desired Dr. Emmet and Clara Brown's Hovertrain in Back to the Future III 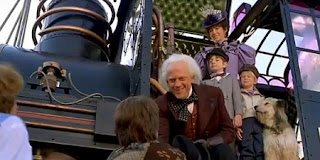 10 A Lady can  be resourceful and use her parasol, laser or hatpin  in sticky situations.

I hope you will give it a whirl. My Steampunks/spacewestern: 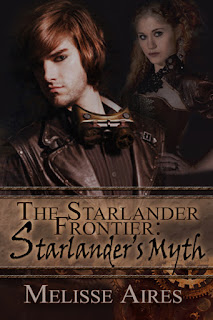 Jack Starlander crept silently over the rocky outcrop to see what was happening on the other side. The newcomers hadn't been quiet at all. Of course, sounds tended to magnify and distort under the bubble. It sounded like an army of flyers descending, but it was really only four.

Now what was that? A woman and a child, both dressed in the latest frilly fashion seen dirtside, surrounded by a bunch of armed men. Not saloon style clothes on the woman, either. Her shirtwaist buttoned clear up to her neck, with no bare flesh at all except her face and hands. The child wore a pink ruffled pinafore over her blue dress, her hair was well kept, curled into ringlets, held back from her face by a floppy pink bow. You didn’t see well cared for kids among the saloon whores. They tended to be wild little beasts in rags, looking to pick pockets or beg for cryst chips.

The woman sat the child down on a large flat-topped rock and watched the men.

These all looked like city dwellers from Hogtie or Abercrombie; well fed, well dressed and well armed, except for two young men. Worker bees. Jack ducked behind a rock. Why was a group of armed men on that empty claim? Were they after him? Records would give his name as being the claim holder of the adjoining property. Why bring a woman and child out to this deserted place?

They didn't need to know he was overhearing their business. He pulled on his protector hood, not because the bubble had a breach, but because the hood had vision enhancing goggles with audio amplification.

He crawled back up the rock, keeping his head low, and found a better spot to observe the group. He could see more details now. The woman was young, with golden blonde hair. Her gown had layers of ruffles over the rear, the latest puffed-out style, which he didn’t care for at all. He liked to get a sense of a woman’s actual shape down below. She looked nervous and held the little girl’s hand tightly. Why the heck would anyone bring a woman and child out to a mining claim?

Jack recognized Galto, a mining official who’d approved his claim here on Yonder Beltway 7, the asteroid that the Collingwood Mining Company had bubbled for mining. They'd got lucky here. There'd been enough ice to form wells and pools once they'd heated things up so they didn't have to import water. Collingwood was making good profits here, but then so was he. He had a nose for cryst. But Galto was not a man to be trusted. Not that any mining officials were. That was why he had half of his haul stuck to a rock in space too small to be noticed by the mining company.

A finely dressed man with a thick gold chain suspended across his protuberant belly, covered in a bright green waistcoat, hobnobbed with Galto. Jewels flashed on his fingers, tie tack and cuff links, and he sported a thick white handlebar mustache. Whiskers were all the style but Jack kept his face military smooth with a shave every morning. Army ways were hard to shake. Even Galto now sported a thin mustache, which looked out of place on his well fed face.

The two simply dressed men rode cheap flyers, the kind that had to enhance their power cell lift with pedal action. Quite tiring on a long journey and this claim was pretty far from the spaceport. They were both big fellows, heavily muscled. Goons. Well armed goons, he amended when he saw their side arms. The woman and child were the only ones in this little group who were unarmed. Interesting.

“Well, I enjoy working with an educated client, such as yourself, Mr. Galto,” the finely dressed man said in a hearty voice. “You are so right, sirrah! Traditionally the gryphon hunted gold. But I have trained this young woman myself to find cryst. Let me demonstrate. Please allow Yurgy here to hide these bags of cryst.” He handed Galto cloth bags. “If you search the bags you will see that some are high grade ore, some are very poor grade.”

“Come here, Mrs. Farrel.” The woman got the child down from the rock and the child clung to her skirt. The mustached man pulled out a scarf and blindfolded the woman. “Here, friend Galto, please check this cloth yourself to verify that it will blind Mrs. Farrel adequately.”

Galto checked the blindfold and appeared to be satisfied.

“You, sir.” Mr. Mustache waggled his jaw at one of the young armed men who accompanied them. “Take these bags of cryst and take off and drop the ore one by one in those rock hills in the distance. Then we'll see my girl do what she's trained to do.” He turned to the young man on the flier. “Oh, and young man? Bury those samples. We all know cryst is rarely found on the ground just waiting to be picked up, don’t we?”

The man flew off with the bags and was soon out of sight.

Jack decided the child must be the woman’s daughter. Though their coloring was different, their facial features were alike. The little girl pressed closer to her mother. What was their role in all this? Perhaps she was the wife of the mustache? Odd that a man of business would bring a woman and child to a place like this. They seemed nervous or afraid, too.

“Now, this is an exceptionally secret procedure, Mr. Galto. Assure me again that we are in a secluded area. I don’t want to have to shoot some miner who stumbles on our little exhibition.”

“Nothing to worry about, Mr. Snurr. The claim over that ridge is Jack Starlander's but he's got a nice vein of cryst on the far side of his land that'll keep him busy for some time. We are unobserved.”

Jack didn’t appreciate Galto knowing so much about his operation but he was a mite pleased Galto was wrong about his whereabouts.

“Oh, a cousin or relative, I think. Not the main family. No doubt using the name for clout.”

Jack grinned, Galto was wrong on all points. Yeah, his vein of cryst was making him rich. That's why he’d bought the robots. They could work without supervision, giving him time to sniff out another vein.

The young flier returned after a bit and Galto retrieved a cloth out of his bag. “Here Gentlemen. Stretch this out between you and turn your backs on Mrs. Farrel, please. She has to disrobe for the transformation.”

“You know what to do, Mrs. Farrel.” Not married to the fat man.

The young woman walked behind the sheet, though from Jack’s angle he could see her from the side. She proceeded to disrobe all the way to what nature had given her. Whoa, not expecting a sight like this. Jack felt heat in his face and other places, too. She was perfectly formed and the corset barely made any difference in her high-breasted lithe figure. She took her bright gold hair down from its low bun and it fell to her waist in a gleaming ripple.

The golden hair seemed to grow. He stared in fascination as her skin turned from pale tan to gold, then wings appeared with golden feathers. Strong legs with claws. A hot damn gryphon shifter! He’d heard about them, they were legends in mining camps, but never thought they actually existed.

“Fetch the cryst, Mrs. Farrel,” Snurr said. He picked the little girl up. The little girl held herself rigidly away from the man and looked on the verge of tears but made no sound.

With a swish of powerful wings the gryphon launched into the air. For such a large creature its flight was graceful. Jack suspected the gryphon was incredibly strong.

The child was the insurance that she would comply, he guessed.

A few minutes later, the gryphon returned with the cryst bags in its beak and claws. It dropped them at Mr. Snurr’s feet.

“Please verify if these are the chunks I had Yurgy hide.”

Galto inspected the bags inside and out. “The very ones.”

“Very good, sir!” Mr. Snurr sounded delighted. His rich voice was beginning to grate on Jack’s ears. “Is she not just as valuable as I told you?”

“Indeed.” Galto said. “I'll take her at the price we agreed upon.”

Slavers. God he hated those!

The men shook hands. “She'll do what you want to keep the child safe.” Snurr said. “I've only used her to hunt cryst, but she's an attractive woman. Wouldn’t you agree? I'm sure you can find some good use of her. The child might be of profit too. Resembles her mother and might have that rare gryphon heredity.”

Oh, now for sure they just need to die.