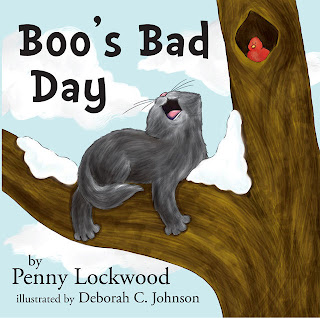 Tagline:
Boo sneaks out of the house and discovers that freedom by himself can be scary.

Boo is a very bored kitten. When Timmy and his mom return home, Boo sneaks out of the house. Boo is frightened by the noises of the big world outside of the safety of his warm home. When Timmy coaxes Boo back into the house, Boo realizes some places are safe and some are not.

Marva, thanks for hosting me. At the end of the tour, I will pick out one commenter’s name and send an autographed copy of Boo’s Bad Day to a United States address only. If the name I pick is someone who lives outside the U.S., I will send a PDF copy of the book. So remember, readers, be sure to leave contact information when you comment!

If your readers missed yesterday’s post, they can catch up at http://carpinelloswritingpages.blogspot.com. Tomorrow, I’ll be visiting with http://albertaross.wordpress.com.

Many of my blog hosts have asked me the question: what inspired me to write a picture book about a cat.

My love of cats started when I was a child. My brother and I always had cats and for some reason, we always named them Buttons (his) and Judy (mine). My mom has never been a big cat lover, but she allowed us our kitties, knowing how much they meant to both of us.

At that time, cats were more for catching mice than pets, but we made sure our cats were pets and not just working animals. One of my first cat stories I can remember is my brother’s cat tangling with a huge six-foot-long snake, which my dad ultimately killed. After that I had a recurring dream of a huge snake slithering up the side of our house and trying to get in. Guess I’ve always had a vivid imagination.

My mother continued to allow us cats, even as they became less outside cats and more inside cats. Another of our cats became quite the birder. Unfortunately, one of his targets was a delightful budgie that my dad had trained to climb a ladder, come when called, and whistle wonderful tunes on command. My mother used to let the bird out of the cage so he had free range of the house. One day while she was washing the floors, the cat snuck into the house and grabbed for the bird. The bird put up such a fuss, my mom was able to save him before the cat could race out the door with his prize.

Another of my “prize” cats was a barn cat I found while visiting my grandmother in Pennsylvania. I convinced my parents to haul the kitten home to Connecticut, but the poor little critter never did get tame. She would hide in the rafters of our garage and only come down to eat. One day when I went out, she became startled by something and dropped down onto my shoulders, leaving huge gashes. Afterward, I developed a fever, and I heard the expression “cat scratch fever” for the first time. A couple of days later, after a storm, the cat was no longer around. My parents told me she ran away, but I always suspected my dad might have taken her “for a ride.”

As I grew into adulthood, my love of cats continued. At one point, I had several roommates who all had cats. These were inside kitties and a much different breed from the half-wild ones of my youth. My love of cats intensified and I knew I always wanted to be around them. Their independence, their warmth, and their curiosity all intrigued me. I was hooked.

When I met my husband, I had a dog as did he. Shortly after we began a life together, I was given a tiny kitten by the parking garage attendant at the office where I worked. I brought her home; we named her Kizzy, and she became another one of the dogs. She followed us everywhere and loved to go for car rides, standing on the front seat with her paws splayed on the dashboard.

As the years passed, we acquired more and more cats, always inside/outside kitties. At one point, we had nine (not counting the times we had mother cats with kittens). One of our cats was actually a black cat by the name of Boo. Boo’s adventure, one freezing winter, became the basis for my story Boo’s Bad Day. Living with cats for so many years, it seemed only natural that I should look to them for inspiration in my story. That’s not to say that my dogs aren’t important to me, too, but for some reason, the cats seem to get into more interesting situations, probably because they really are curious about everything. They can’t seem to ignore a challenge or an empty box.

I’ve preferred black cats for many years and one of my favorites was Boo. When he was a teenager, he managed to get stuck in a tall fir tree during an ice storm. Poor little guy knew how to get up the tree, but he didn’t know how to get down! At first, we didn’t realize he was stuck outside in the storm and assumed he was holed up somewhere nice and warm. The next day we called him, and we finally heard him meowing from high up the tree. We tried to reach him, but we couldn’t. His cries got weaker and weaker until we feared he would fall out of the tree. The fire department told us they no longer rescued cats. We called a friend who worked on tall buildings doing construction. He was not afraid of heights or ladders and climbed to the top of our fifty-foot ladder. By reaching as far as he could, he was able to grab Boo and bring him down. Boo was quite content to stay curled up in front of our woodstove for at least a week.

When my grandchildren came along, I decided it was time to attempt a picture book. I thought of Boo and wanted to tell a tale from the kitty’s point of view. Boo’s Bad Day is the result. I submitted it to 4RV Publishing and it was accepted. They have their own stable of artists. I had no contact with my wonderful, talented illustrator Deborah C. Johnson until the book was in galley form. I was fortunate to be assigned an artist who obviously loves cats as much as I do. She captured the expressions of Boo during each of his adventures and really brings the story to life.

Penny Lockwood has published more than 100 articles, 75 stories, a chapbook, and her stories have been included in two anthologies. She writes for both adults and children. Her fiction has appeared in numerous genre and children’s publications, and non fiction work has appeared in a variety of writing, parenting, and young adult print magazines and on line publications. She edits for MuseItUp Publishing. Visit her web site at http:// pennylockwoodehrenkranz.yolasite.com. Her writing blog is located at http://pennylockwoodehrenkranz.blogspot.com/.

She has recently released Boo’s Bad Day with 4RV Publishing and has three other children’s books under contract with them: Ghost for Rent, Ghost for Lunch, and Many Colored Coats. She has three romances published by MuseItUp Publishing: Love Delivery, Lady in Waiting, and Mirror, Mirror. Her short story collection, A Past and A Future, is available through Sam’s Dot Publishing and Smashwords.