Best ever sculpture of kelpies for a Scottish arts event. A lighting test was carried out on the Kelpies in Falkirk, central Scotland, before they play a key role in a series of events beginning next week.

A night-time arts event, described as the international launch of the Kelpies, will take place at the equine sculptures on April 17 and 18.
Artist Andy Scott's 300-tonne, 30-metre sculptures of horses' heads will be "brought to life" with a light, sound and flame performance by a pyrotechnic company. 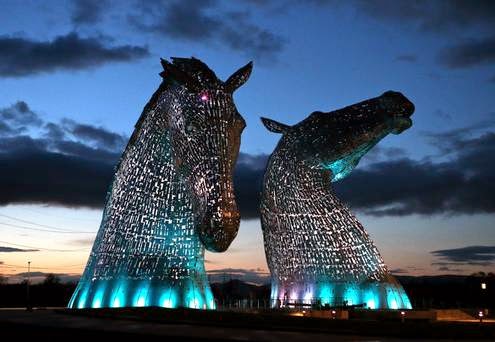 
Two horses sloshed in the pool. Sunk up to their hocks in the water, they struck at each other with raised forelegs. Strangely, neither horse whinnied or screamed, but the sounds of their huffing breath made it clear they were both near exhaustion. One horse was sky blue, the other snow white. Kat looked harder and thought she saw...yes! A horn grew from the white horse’s forehead. A unicorn! A smile spread across her face before a scowl of concern quickly replaced it. Blood ran down the unicorn’s neck, splashing into the scummy, green pond water turning it a noxious brown.

“Help me!” It was the unicorn pleading for aid. For a moment, Kat was puzzled. She had not been able to hear the thoughts of the other creatures in the Otherworld. She felt the sincerity in the plea and had to help the unicorn.

The blue horse reared back on its hind legs, but Kat held on, her body whipping back and forth under the horse’s neck. When its forelegs came down hard, her hold slipped. Plunging toward the water, her stomach knotted, and she held her breath. But when her feet hit the bottom the water was not quite waist deep. She fell backward onto her rear end with her head just above the surface. Kat let out her breath in relief...until she looked up into a wide-opened mouth full of black teeth surrounded by a flash of blue. It lunged at her head. She tensed her shoulders and brought her arms to cover her face in a feeble attempt to protect herself.
The unicorn had jumped backward when Kat launched herself at the blue horse. Now it lunged forward with its head down, its spiral horn pointed at the breast of the blue horse. The blue reared, barely avoiding the unicorn’s attack.

Kat looked over her shoulder but saw only the unicorn. The blue horse had disappeared. Scanning the land all around, she saw neither hide nor hair.

“Into the pond’s depths,” said a sweet tenor voice behind her. Kat whipped around to find the unicorn standing behind her, his front legs on the berm. “If you could please step away so I can remove myself from his pitiful puddle.”

Kat moved. The unicorn rose out of the pond, stopped, and shook himself violently from ear tips to back fetlocks, spraying Kat with muddy water. The unicorn would have been pure white, despite the layer of mud and weeds. Kat took in the long beard, like a goat, and cloven hooves and decided this wasn’t a breed of horse at all.

She ducked to avoid too much of a soaking, and asked, “What kind of horse lives underwater?”

“He is a kelpie, a water creature. They are quite wild and very protective of their territory. I happened to stumble into his dubh lochan, and he attacked me. He wouldn’t let me out of the pool, so I had to defend myself.”