Okay, I beat myself into submission (kinky, eh?) to complete the fifth book in the Witches of Galdorheim series. If you're keeping track, you'll know that the three main books in the series are all about the adventures of Katrina the teenage witch. Her primary magic is talking to animals. A regular Dr. Doolittle, she is. Of course, in the first book (Bad Spelling), she doesn't know that's her power. All she does know is that she is magically impaired. Not her fault and the first book explains why she's having some bad spelling problems. The second and third book in the series follow her adventures as she gains skill in her abilities and runs into all sorts of problems along the way.

The fourth book, Spellslinger, is a short story about Kat's brother, Rune. He's half vampire and half warlock, which presents a whole raft of problems. This book gives a bit of backstory about Rune's magic and how he learns to contain his vampire half.

So, what is the fourth book? It seems like Rune is a very popular guy and some faithful readers want to know more. So, what the heck, the Rune story happens after all the events of the other books. It touches on a couple of real issues for teens: What do you think of a deadbeat dad? and How Bad is it if You Accidentally Kill Someone? (Book 3 of the series).

Here's an intro to the almost complete fourth book, "Blood Ties Tested." If I can browbeat my alpha readers into advising me, then it should be out soon. Since my books are all self-published (although several were traditionally published), I can put it up anytime I want.

So, here's a bit of the story. It might be changed in the final version after a bunch of people give their opinion on it. I just grabbed a chapter at random. In this one, Rune is being unwillingly transported to his vampire father's castle in the Tatras Mountains of Slovakia. And the cover shown is a preliminary stab, so don't judge. 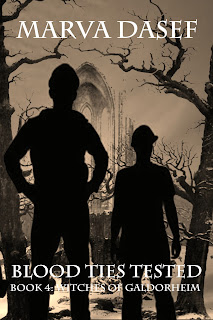 
Rune stood staring at his feet in the terminal of the Bardufoss Airport waiting for his “escort.” His mother had made sure he wouldn’t deviate from the itinerary. She’d appointed him a chaperone, like he was some kind of little kid. Well, he kind of understood why, since the last time he was supposed to visit his father, he’d absconded to Scotland. But, still, that didn’t stop him from fuming about it.

At 2:00 am, not many people were in the terminal. The whine of a jet engine on the field hurt his sensitive ears. He looked around but didn’t see anybody who looked like a vampire. A hunched old man with a walker kept eyeing him up and down. Of course, vampires could look like anybody. They didn’t have to have black hair and wrap themselves in black capes. He chuckled when he remembered the phase he went through dressed exactly like that. But he got tired of tripping on the cape and the hair gel he put on to give him that slicked back look made his head itch.

His escort wouldn’t be able to get to the airport in the daytime. At least as a half-n-half, Rune could traipse around in the sunshine. He didn’t much care for it since the sun bothered his light-sensitive eyes, but he could do it.

A huge blond man in an Icelandic style wool sweater approached him with a swaggering walk and a self-satisfied look on his face. “Rune? I am Sven, your chaperone.” The big guy chuckled and laid a huge hand on Rune’s shoulder. “You don’t look underage.”

Rune rolled his shoulder out from under the man’s paw. He wanted to make a rude retort, but held back. “So you’re a--” He glanced around to see if anybody else was close by. “Vampire? Funny, you don’t look like a vampire.”

Sven grinned and Rune noted the man’s canines grow a bit longer. “Oh, I am, boy. You’d be no match for me so don’t try any funny business. Your aunt informed of your tendency to bolt.” Sven laughed and laced his fingers together, cracking his huge knuckles. “Not many places to bolt to here in Bardufoss. I never heard of it even though I’m Norwegian. . .originally, of course.”

“Figured Aunt Thordis wouldn’t take any chances.” Rune tugged at the sleeve of his Grateful Dead jacket Kat had given him for his birthday. “My mom made it perfectly clear if I didn’t make it to Drakos’ castle, I may as well not come home at all.” Rune picked up his backpack from the floor. “So what’s next? I checked the departure boards. You can’t get to Brati-whatever from here.”

“We’ll take SAS to Trondheim, then KLM to Slovakia. We have three layovers stops, but none of them are very long. Except the one we have to wait twelve hours. The others, no more than four or five hours.”

“Good goddess, this is going to take forever. Why can’t we just drive?” Rune looked at Sven hopefully. Sven shook his massive blond head left and right. Rune huffed and jerked around toward the concourse aisle “Fine. What’s our gate?”

Sven waved Rune ahead of him, and they walked down the very short terminal passage to the Norwegian Airlines gate.

* * *
Much to Rune’s dismay, Sven kept a close eye on him for the entire trip.

At the 12-hour layover in Amsterdam, Rune rubbed his palms on his jeans, then said, “I gotta hit the gents, Sven.”

Sven leaned forward on his chair and raised an eyebrow. “Why do you want your backpack? I’ll watch it.”

“I want to change clothes.” Rune slipped out of his jacket, raised his right arm and sniffed. “Yeah, I’m getting a little ripe.”

Sven hefted Rune’s backpack, and nodded in the direction of the Herren sign. Rune mumbled, “Worth a try.” Sven grinned and gave Rune a gentle shove on his back. The boy tripped when his shoes’ soles slid on the slick floor. Sven’s giant hand pulled him upright before he fell on his face.

Get the entire Witches of Galdorheim series (except for this last book) at Amazon, Kobo, Barnes & Noble, etc.