I've marked down the paperback of BAD SPELLING for holiday sales. It will go up to the already reasonable $8 by Christmas. This is a short opportunity to get the paperback for only $5.99. http://www.amazon.com/dp/1481021559/ 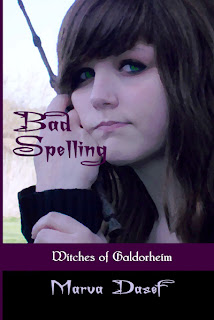 “All aboard!” the driver shouted. Rune climbed into the car behind the driver’s. Kat thought of it as the engine, something she’d read about in her history book. However, it didn’t appear to have any motive power, just the troll holding the brake.

Andy hugged his brothers, Endy and Indy, for the last time. They patted him on the back and murmured in his ear. Kat assumed they were wishing him a good journey. When she saw tears in their eyes, she turned away to give them some privacy. Maybe Andy would never have left the trolls if it hadn’t been for her. Yet Andy seemed eager to find his original family in Siberia.

Kat asked Rune for cushions. He shook his head and said, “Wimp. It’s only ten minutes. You’ve got plenty of padding already.”

Brothers! However, she realized she’d never have gotten this far without Rune. She swung a leg over the edge of the same car as Rune had hopped in. Not sure what to expect, she sat in the back corner and braced herself as best she could. Andy climbed in and sat kitty-corner from her at the front. Rune wedged himself in the opposite corner from Kat.

It was a good thing she was holding on tight. The driver released the brake, and the train shot forward. Her head snapped back and hit the side of the car, making her very glad she’d also thought to pull up the hood on her parka. She had a certain grim satisfaction seeing Rune wince when his head bounced off the backside of the car.

The train picked up speed until the walls of the tunnel became a blur. As the train rushed forward, spirit lights flicked on before them and winked out once they passed. Kat wondered whether she wouldn’t have preferred to travel in the dark; the motion and the flashing lights were making her dizzy. Besides moving at a horrendous speed, the cars rocked back and forth on the track. Her tailbone suffered in earnest within a minute.

Then it got worse.