The excruciating process of creating print out of electronic has begun. The first book in the Witches of Galdorheim saga is coming to Amazon's virtual shelves soon. A mere $8.00 (I hate those .99 endings) will snag you a copy of BAD SPELLING with the bonus story SPELLSLINGER included. Here's the entire wraparound cover. Don't be picky; I write, not draw.


Now available on Amazon. Eligible for free shipping
and Buy 3, Get One Free. 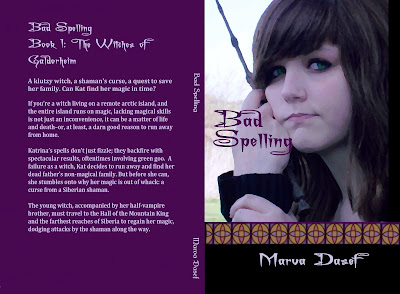 And I'm happy to introduce the mascot of the series, Teddy the long-suffering bunny familiar for Kat the Teen Witch. 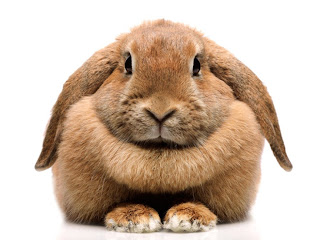 Here's an excerpt showing why Teddy is an unlucky familiar, at least in BAD SPELLING.

She (Miss Mariah) faced the class. “Now then, please take out your chalk and wands for today’s lesson, which is,” she shot a semi-annoyed look at Rune and Dalton, “transformation.” The Wiccan students rustled bags and whispered to each other while they did as told.

When the witches and warlocks in training looked up, she continued. “Although some students can transform without benefit of pentagram and wand, those of you who are beginners, or less motivated—” she paused and gave Kat a hard look, “must practice first with the proper equipment.”

Kat’s face warmed, and she sank lower into her chair. Heaving a sigh, she set her brown bunny, Teddy, on her desktop and fumbled in her bag for her spell book, yew wood wand, and chalk.

Merry, the curly-haired blonde witch sitting next to Kat, waved her arm in the air.

“What is it, Merry?” Miss Mariah asked.

“Can you make Katrina sit somewhere else? Whenever she’s near me, my spells don’t work right. She’s a jinx.”

The class snickered. Kat grimaced at Merry. If I got my hands on her…aw, what’s the use?

“No, everybody stays right where they are,” Miss Mariah snapped. She pasted on a fake smile and continued in a treacle-sweet voice. “Now, class, draw the pentagram on your desktop and place your familiar in its center.”

The younger students practicing their first transformations looked to the board where, under Miss Mariah’s control, the chalk drew a practice pentagram stopping short of completing the last of the five points. She tapped the board. “An unattended pentagram can cause all sorts of problems, the least being a tusser or tomte taking advantage of an open gateway. They’re harmless for the most part but like to play tricks. So be prepared with your spell before completing the pentagram.” More than one kid smudged an opening in their already drawn star.

“Children, you must focus. Don’t let yourselves get distracted.” Miss Mariah adjusted a child’s grip on his wand as she walked by.

Merry curled her lip and hissed, “You’d better not screw me up. If I can’t work this spell right, it’ll be your fault.”

“Tough luck, Merry,” Kat snarled. “If you’re such a great witch, my being here shouldn’t make any difference.”

Turning away from Merry, Kat finished the final leg of her pentagram and set the bunny in the center. “Stay right there, Teddy,” she whispered to her little brown rabbit, setting a chunk of carrot in front of him. He made a dash for the edge of the desk. Kat hauled him back. “Cut it out. You’ll smear my chalk lines.” She stroked his soft fur for a moment. “Hope this works.” He twitched his nose twice, closed his eyes, and hunkered down.

Kat checked her spell book one last time, took a deep breath, and completed the spell with a loud “Fullgerður!” and a dramatic sweep of her arms, just missing Merry’s head with her wand.

Merry shrieked and jumped out of her chair. She glared at Kat while wiping green goo off the side of her face. “Your rabbit stinks. Just like your spellcasting!”

****
Also available in ebook format at MuseItUp Publishing and Amazon.

Email ThisBlogThis!Share to TwitterShare to FacebookShare to Pinterest
Labels: Paperbacks, Witches of Galdorheim