Murder Served Hot for the Holidays 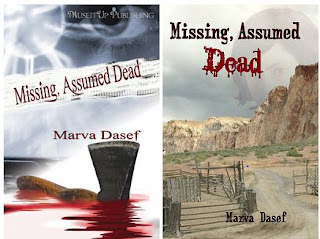 Kam gasped and jumped down the embankment toward the creek, stumbling through the underbrush. She heard the pickup tires screech and glanced back. Scruffy had gotten out and headed down the slope behind her. She moved faster, gripping her hair spray. A strap broke on her sandal, and she kicked it off. Ignoring the brambles poking into her legs through her jeans, she moved as fast as she could, the terrain preventing her from flat out running.

She heard the crashing of bushes behind her and put on more steam. She knew the pickup would have reached her car by now, but she’d be coming up on the passenger door, slightly downhill from the driver’s side. She switched the hair spray to her left hand and pawed into her purse for the keys. Finding them, she dropped the bag on the ground to free her hands and kept moving.

When she reached the Chrysler, the driver had already skidded down the embankment and was standing on the driver’s side. Thin compared to the other man, but his arms were solid muscle under the tats. She rushed to the passenger side, jerked open the heavy door, dived in, slammed the door and hit the lock button on the key fob.

The driver pounded the window with his fist. The scruffy one had caught up and pulled on the passenger side door handle. Kam hit the panic button on the fob. The deep and seriously loud Chrysler horn went off with honking bursts. Both men jumped back from the car.

The driver yelled, “I’ll fetch the rifle.” He scrambled to climb up the embankment.

Kam’s heart almost stopped. Even the shatterproof windows wouldn’t stand up against a hunting rifle. She looked around the car wildly, her breath coming in sharp rasps, and then launched herself over the console and into the rear. Sweat ran from her armpits, soaking her blouse. She ran her shaking hands across the top of the seat back hunting for the latch. She hoped the Chrysler had fold down back seats. If she could just reach the tire iron, she’d have a weapon. If this stupid car even had one that is.

She felt the latch pin, grasped it and pulled it up. It clicked. She grasped the seat back in both hands and pulled it down. On her belly, she crawled halfway into the trunk searching for the spare tire well.