Sinking of the Titanic

I found an interesting book browsing around. The ideas intrigued me, so I asked Wendy Cockroft for more details on her two books about the Titanic. See my review on Smashwords.

Wendy Cockroft on Her Titanic Books

The result of a Titanic-themed writing contest from a few years ago, the two tales Wendy Cockcroft has written takes two different views of the great ship and its sinking in April 1912. 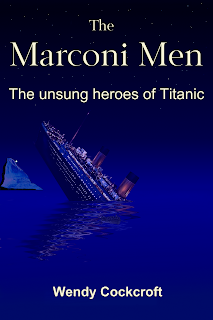 "The first of them, The Marconi Men, is about the wireless radio operators Jack Phillips and Harold Bride, and the role they played in the day-to-day running of the ship and the eventual rescue of the survivors by Carpathia. I've gone into detail about life aboard the ship, the officers and crew, and the luxuries enjoyed by the passengers compared and contrasted with the way they were treated when the ship struck the iceberg. While every effort has been made to fully research the real historical events, which included the insertion of details from survivor memoirs and interviews recorded in historical archives, some fictionalization has been employed to provide a sense of immediacy and to draw the reader into the action as it unfolds. Sources include "Titanic and Other Ships," the memoir by Charles Lightoller, the most senior surviving officer (whose colourful life makes him worthy of a Hollywood biopic), and Harold Bride's interview with the New York Times.

"I thought, if I'm going to write about it from the wireless operators' point of view, I need to go into explicit detail of what their lives were like, what shipboard conditions were like, and to get transcripts of their actual conversations to give readers a fly-on-the-wall view of what happened. So yeah, I fictionalised the conversations a little but based on the transcripts and social norms of the time.

"I took the biggest liberties with Lightoller. He's a bit of an action man figure and in his memoirs he's playful, generous, and hard-working but he's also professional and knows both his job and his place. Titanic was one of many ships he's sailed on. He really is a fascinating figure. He was born in Lancashire and I gave him a thick accent, which is more pronounced when he's stressed. It's too easy to bash a character to create sympathy. Giving him flaws, an accent, and the moral authority to make decisions he knew he'd have to answer for gave him layers that merely painting him as a tragic figure wouldn't.

"It's hard not to write from a tech-savvy 21st Century point of view. I'm a geek and I wanted to capture the geekiness of the "sparks" and their world. If you read through transcripts of old wireless messages you'll find that they conversed in a manner that is not unlike modern texting. Remember, this was done in dots and dashes; long and short taps on the sending button while listening through headphones for the pips from the other person. Meanwhile, other messages were coming through. It was like the internet today. I wanted to get that sensation across as I wrote about their friend Harold Cottam  and the other operators on the other ships. Attitudes to tech ranged from savvy to fascination to aversion, pretty much as it does today."

The story begins at the ending of the sea trials and Titanic's trips around the British coast to pick up passengers and crew and ends at the arrival in New York of the survivors aboard the Carpathia. 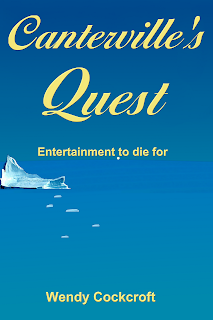 Wendy's other ebook, Canterville's Quest, takes a sharp dig at the world of television mediums and the pursuit of the paranormal for entertainment.

"Television medium Edward de Montfort Canterville plans to go to the site of the Titanic's sinking to conduct a live séance on the hundredth anniversary of the sinking. Edward de Montfort Canterville is based on a popular UK television medium Derek Acorah and Canterville's Quest is based on his ridiculous Michael Jackson live séance stunt. Since this story is completely fictional I went a bit mad with the story and let the characters take me where they would. I just needed them to reenact the Titanic's last journey and add a few local details in. I've actually been to Titanic's dock at Harland and Woolf's old shipyard in Belfast. The news anchor Nancy Boyd is based on television presenters I saw on UTV when I was growing up. Declan Keogh (pronounced "Kyo") is based on a range of Irish television presenters. I thought I'd have a bit of fun with him by making him a bit of a baddie. The real ones are perfectly decent, I'm sure. I've never actually met any.

"I've had conversations with people online about meeting your heroes and what it's like. One in particular that stood out for me was when an internet friend met an established actor but found him to be offhand and unwelcoming. When she met other favourites in Glasgow, they were happy to go for a drink with her. I wanted to recreate her experience in a fictional setting, but add the dimension of professionals interacting to add a layer of nuance to it.

"Patricia Shepherd is a sort of Bridget Jones type but I didn't want to make her a tragicomic figure. She is a professional, lives alone, and wants to make something of herself. She's also got to make it in a man's world where she lacks the advantage of good looks and charm so the casting couch route was never open to her. Now that she's a manager, she's got to make things work but finds she lacks the personal authority to make her crew completely respect her. She's never really found the key to success in that area; she's just got a bigger paycheck for being a dogsbody with more responsibility. Building her character meant putting layers on that made her human. She's flawed but has a good side, too. The decision to add a romantic dimension came later on; Engelhardt presents the opportunity to flirt because he's good looking and to Patricia's mind, exotic. Besides, she's a woman. Why not?

"I don't really believe in the paranormal but I keep hearing stories that make me think more about the possibility of it being real. When you know what goes on behind the scenes of ghost hunter programmes it's hard to take it too seriously but I thought I'd add a layer of mystery by opening up the possibility that Edward's gift is real and Patricia doesn't take it too seriously because she's afraid she'd lose her mind if she did.

"I've written other stuff which I intend to publish on Smashwords and no, it's not all about Titanic!"

Wendy Cockcroft lives in Manchester, UK, with her husband Richard. When she's not writing she's a web designer, blogger, and political activist for internet freedom.