Read all about Andy, the troll turned human on Rosanne Dowell's blog.

To round out the release, I'll have a full line up of articles, character studies and excerpts from now to Halloween. Check the schedule page for the on-going blogs and articles. 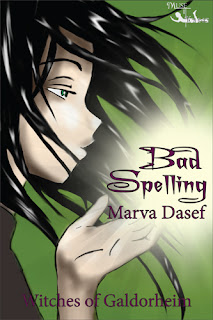 BAD SPELLING – Book 1 of the Witches of Galdorheim
A klutzy witch, a shaman's curse, a quest to save her family. Can Kat find her magic in time?
Now at MuseItUp Publishing and Amazon

The young witch, accompanied by her warlock brother, must travel to the Hall of the Mountain King and the farthest reaches of Siberia to regain her magic, dodging attacks by the shaman along the way. At the Troll Kingdom, a young troll, Andy, joins the siblings in their quest to find the shaman and kill the curse.