BAD SPELLING
A klutzy witch, a shaman's curse, a quest to save her family. Can Kat find her magic in time?
Now at MuseItUp Publishing and Amazon

Andy is a troll...sort of. Stolen at birth by the Trolless Gorm to replace one of her newborn triplets, Andy is through and through troll. He loves his brothers Endy and Indy, respects the troll King Ole, and is overall pretty happy being a troll.

You'll find out more about the Troll world in upcoming post "Excerpt - Hall of the Mountain King," but for now, let's talk about the Siberian side of the family.

The Samis of Siberia are primarily hunter/gatherers with fishing being a major food source. You can imagine that near the Arctic Circle, farming is not possible. Russia pulled the same dirty trick on the Samis as the US pulled on the indigenous tribes of North America: relocation. They moved them all next door to the Barents Sea, which, naturally, is not a desirable piece of real estate. I know we could all go on and on about the injustices of the world, but that's not what I'm doing here. I encourage you to follow the links from the Free Encyclopedia. It's an addictive trail of fascintating information.

The Samis practice shamanism with various shamans handling different parts of life.
This is very simplistic, and you won't have to try very hard to find differences in my interpretations of shamanistic matters with real-world examples. But, hey, I'm writing a fantasy here and am allowed to mess with all things magical to my heart's content.

For more on Andy and the trolls, see the "Excerpt - Hall of the Mountain King." 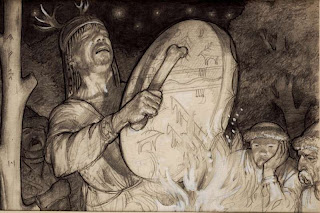 Ivansi rocked from one foot to the other and then rubbed his right mukluk against his left calf. He had much to do before leaving, and he wanted to get on with it. He’d never say it to anybody, but he didn’t think his grandfather was that good a shaman. Even so, it wasn’t his place to question shamans of the tribe. For now, all he wanted to know was whether or not his hunt would succeed, but his grandfather never hurried things along. None of the shamans ever did.

The hunt he proposed was dangerous; that he knew all too well, since his own son, Borisi, disappeared many turns of the sun before. His chances of success were good, for he was a seasoned hunter, and would not be going alone. But even a large kayak could easily disappear into the fierce Barents Sea, never to be seen again.

Ivansi’s mind wandered to Borisi. A few months after his son disappeared, Ivansi had steeled his nerves and gone to seek the assistance of the Sambana, the village shaman who could contact the dead. Unlike the Tadebya, who sought the guidance of the gods in everyday matters, or the Vidutana, who could provide information on the heavens, the Sambana lived alone and away from the tribe. The very nature of the Sambana’s talent made him a fearful presence, so the tribe avoided contact with the old man unless absolutely necessary, which seemed to suit the ancient shaman just fine. The people were convinced the Sambana had gone crazy years before. The rumor was the Sambana’s wife had run away with a witch man. Some said the Sambana had lived for more than a thousand years, but nobody could prove it one way or the other.

Ivansi had feared his son was dead but wanted to know for sure. The Sambana sought Borisi’s spirit in his seeing flame but could not contact him. Usually, the purpose of contact with the dead was to aid the soul into the afterlife. Since he could not speak to Borisi, the Sambana decided the young man must still live. He was lost, obviously, but not dead. The Sambana told Ivansi not to worry; he would protect his son against evil. The Sambana sent a magic shield to seek Borisi wherever he was and surround him.

Ivansi’s attention returned to the present when the Tadebya snuffed out the flame and looked up at him. “Your hunt will succeed, but you must return within seven days. Stay not one day longer, no matter how good the hunting.”

“Yes, Tadebya, I will.” Ivansi exited the shaman’s tent and went to tell the rest of his hunting party they could leave right away. The five other hunters had prepared the two kayaks and loaded the gear needed for the week-long trip. With twenty hours of dark each day, it made no difference whether they began the hunt during the day or at night, although they preferred to travel during the dark times and hunt in the twilight hours.