Excerpt - In the Hall of the Mountain King

Special Programming Note: Bad Spelling reviewed on the 23rd on Rochelle's Reviews.
Voting from 10/21 through 10/28 on the You Gotta Read Covers blog. Bad Spelling's cover is #16. Please vote! 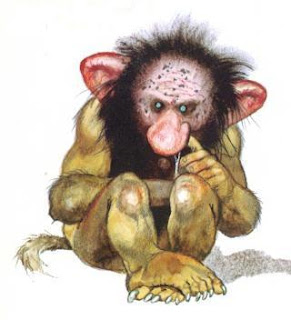 Trolls. What do you imagine? Maybe something like the big ugly pictured here. In my Witches of Galdorheim series, I wanted a cave-dwelling bunch of uglies, but dwarves didn’t seem right for my book. Then I started hearing music inside my head. You know how that goes, right? It builds and builds until it has you screaming in frustration, willing to even listen to some other music to at least swap the tormenting sound.


A troll is a fearsome member of a mythical race from Norse mythology. Originally more or less the Nordic equivalents of giants, although often smaller in size, the different depictions have come to range from the fiendish giants – similar to the ogres of England – to a devious, more human-like folk of the wilderness, living underground in hills, caves or mounds.

In Bad Spelling, Kat and her smart-aleck half-brother, Rune, (also happens to be a vampire, but has absolutely no resemblance to the Twilight guy except they’re both cute as hell) are directed by Kat’s flash-frozen dad (Rune calls him a popsickle) to visit the Troll King. At the Hall, she requests assistance from King Ole, the Norwegian Troll King. He arranges for her and Rune to ride the Trollercoaster, which starts in Norway and ends up in the Ural Mountains. From there Kat, Rune, and a changeling troll named Andy travel to Siberia to find Kat's family.

Jtte collected another drop of blood from Kat, smearing it onto a small piece of glass. She looked at her finger and saw the pinprick already closed. Jtte wiped the spindle point clean with a strong-smelling liquid, then collected blood from Andy, perhaps stabbing his finger with a little more vigor than necessary. Jtte bowed to the king. “I’ll go perform the tests in my workshop.”

“How long will it take?” King Ole asked.

“A few hours at most.” The troll disappeared behind the throne.

King Ole turned to Rune and Kat. “It seems we have some time to kill,” he said with a smile. “We’ll have a banquet. You will be my guests, of course.” Every troll in the cavern cheered the king’s announcement, and many dashed off presumably to prepare for the feast. King Ole stepped behind his throne, motioning for Rune and Kat to follow him. “You, too, Andy. Your brothers may come, as well.”

The triplets followed Rune and Kat. Once they exited the throne room, they walked down a long tunnel until coming into another cavern. This one had fewer stalagmites. Trolls had spread heavy wooden tables and benches around the big room. King Ole took his seat on a smaller throne at a table set on a raised dais. He pointed them to chairs at his table. Quite an honor, thought Kat, having dinner with a king!

Before long, the cavern was packed with laughing, boisterous trolls. The party got into full swing when several ogres entered the hall, wearing long white aprons and carrying huge platters stacked with all kinds of meats, breads, and big pitchers of mead. The ogre waiters first served the king’s table, then the rest of the trolls.

“I didn’t know ogres worked with trolls,” Rune commented to the king.

King Ole smiled, showing huge yellowed teeth. “They don’t usually. We’ve tamed a few to serve us. Stupid as they are, it takes a long time to train them, but, once they learn their tasks, they’re pretty good workers.”

Rune waved down an ogre carrying a big plate of meat. “Is there any rare steak? Very rare?” Kat made a face, but thanked the stars they roasted the meat before serving.

The banquet went on for some time. Kat hadn’t realized how hungry she was until she pushed herself away from the table, stuffed with goose meat, crusty bread, and more than one mug of very good mead. During the long trek across the ice and the ocean voyage, they had only eaten snack food–dried apples and raisins, some bread and cheese for sandwiches–and those supplies had run out by the time they got past the jotun.

When everyone appeared to be finished eating, the trolls broke into song.

So Yes, Yes Yes
I must confess confess
There is nothing in this world, you see
That I'd rather rather be
Than a roly-poly, roly-poly
Roly-poly trolly
Yes, I'd love to be
Why what ecstasy
Yes, I'd love to beeeeee a troll!
“The Troll Song” by Jerome A. Holst © 2007 Lyrics used with permission of the author