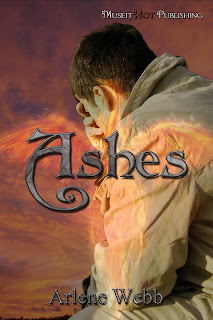 WARNING: Ashes is a paranormal suspense with adult content.

Those responsible, including me are dead.

Please. I’ll do anything.

Head, heart, stomach on fire, no choice but to accept the stirring within.

Five stages of grief? Never. Create another step. Resolution. I will, I must, hold my brother’s hand again.

How long did it take for a male in his prime to die? The metal rod had been staked deep into the desert soil of Las Vegas. Lyle no longer struggled against the chain, tried to shelter his skin from the searing heat, or screamed for a soul with a shred of human compassion to help him.

Surrounded by low shrubs with a pungent crisp scent, there had to be reason he continued to draw in their aroma. His daydream with denial began to weaken as his thoughts hardened from despair into anger. Lyle pressed against his brother’s stiffening body, but no amount of friction created a response. Reality intruded with more stomach spasms and he grunted, shifting aside.

He willed himself calm, and focused on the message traced in the sand. He trailed his finger to edge the outline of the heart beside his name into a stronger, thicker image. The “L” blurred into an “M,” nausea clogged his throat, and the moisture in his mouth jarred him toward clarity.

The truth? Lyle was no longer part of a binary system. He wasn’t the half that needed water and medical attention hours ago. He was the worthless bastard who had to dig six inches further down, pull up a steel bar, and carry Myles home.

An imaginary hand stroked his head, the firm touch of male flesh soothed the tears on his cheek and his dead brother’s voice whispered in his ear, “Sorry, Lyle. Permanently separated—how weird is that? You mustn’t follow me. Move your butt. Find them instead. Avenge me.”

“Sure.” Lyle spat blood through his cracked lips. “I’ll get right on it.” Impetuous and irrational, Myles had always been the weaker. But Lyle, older by three minutes, managed to rescue his younger bro from every sociopath that befell him.

Not this time. Myles headed for a pine box.

Lyle headed toward damnation as soon as he stopped pretending he was Myles. The chain didn’t hold his leg tight, no sharp object had opened his veins, and not a bone in his body had been smashed. Lyle lay facedown in the dirt, alongside his twin, imagining over and over what it must have felt like to die like this.

How much guilt can a heart take before it goes quiet? And who dared to approach, interrupting his snuggle with the dead? A ripple of dust and a fluttering irritated Lyle. Hot air and cinnamon hit his face. He snapped open his eyes and jerked to his feet.

A dying buzzard? More like a deathly ill, midget flamingo. The creature that landed in front of Lyle appeared deader than Myles.

He lowered his hands and hunched down. Three feet tall at most, a foot of height added by its scrawny neck, the bird angled its head as if it were blind, wobbling on decrepit legs. Two feathers—faded crimson and gold—clung to its hairless, grey form. It looked like it should be hanging from the fist of a voodoo queen.