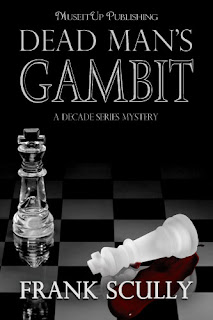 DEAD MAN'S GAMBIT
by Frank Scully www.frankjscully.com
Available at the bookstore at www.museitup.com and also at Amazon, Barnes & Noble, Smashwords, Omnilit and other eBook retailers.

A game of real life Monopoly between bitter rivals becomes deadly as one side ups the ante and plays for keeps, but even death can’t stop the game.
Detective-turned-Assistant DA, Mike Johnson finds himself living in a comfortable rut. That is, until Warren Rogga, a friend he helped convict is murdered in prison, leaving only a last request: Protect his family.
Mike owes Warren more than he can repay but is about to find out what it will cost him. It had been an ugly case and is going to get uglier as it draws Mike back into its tangled web of sex, politics, greed, big money and cold hearted killers.
The evidence against Warren, a rich and powerful man, was overwhelming. His mistress and illegitimate child were murdered. He was there that night. They had argued. The murder weapon was found hidden on his property. An open and shut case. Mike couldn’t ignore the evidence he had collected and Warren went to prison.

When he starts to look into the case again, the justice system turns on him. Forced out of his job as a DA, investigated by the police, hounded by the media, and manipulated by powerful people, Mike and his family and friends find their lives in danger as Mike becomes a player in the elaborate game of real life Monopoly played by a masquerade ball coterie of rich men, political power brokers, and an assortment of other crooks and criminals. There is only one rule in the game. Winner lives, loser dies.

Something poked me, and it really irritated me. I wanted to open my eyes, but they were nailed, stitched, and glued shut. My arm was so heavy it didn’t budge when I asked it to swat whatever was poking me.

“Uuaaoohhah naahay toay.” I wondered what that noise was. Then I realized it was me. What the hell did I say?

My eyes opened. God, the light was bright. I shut them and tried to talk again. Someone else spoke. Somebody pushed open one of my eyelids and shined a light in my eye. Christ. Just what I needed. I tried to shake the hand off.

“Awake are you? You’re a lucky one.” The voice was cheery, feminine. “I better call the doctor.” Then I was alone.

I opened my eyes again. This time without help. It was still bright, but not so painful. I looked around. I was in a bed with tubes running here and there, into and out of me, and hooked up to electronic gizmos with blinking lights and wavy lines.

Hospital. The thought came into my mind. I’m in a hospital. That’s good. The hell it is! Why am I am in a hospital? Questions tumbled over themselves in my mind, but no answers. Panic rode the questions and overtook whatever reason I had left.

“Hi there. How’re you feeling? Silly question, right?” A young, agreeable looking man in a white coat with a stethoscope around his neck spoke to me as he read my chart

“You’re making a remarkable recovery. Can you talk?”

He understood me even if I didn’t. “Sure,” he held a glass of water for me. I sucked on it greedily.

I was willing to oblige. “Better,” I croaked.

“Good, very good. Can you answer some questions?”

I nodded. I hoped I could. I sure wanted to ask some. “Can you tell us who you are?” he asked softly.

Opening my mouth, all ready to answer, I suddenly realized I couldn’t. Who was I? I didn’t know. But I have to know. Everybody knows.

Seeing my panic the doctor patted my shoulder. “Take it easy. It’ll come. Your system has been through some severe shocks. Get some sleep. We’ll try again later.” He nodded to the nurse. She injected something into one of the tubes.

“Why, you’re in Long Beach Memorial Hospital, of course.”

I felt myself slipping. I saw a bright yellow background with the word “NO” in red floating all over. Then nothing.