Dying for Justice by L.J. Sellers 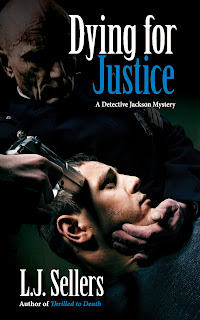 Dying for Justice
by L.J. Sellers

Two unsolved murders from the past, a corrupt cop, and a painful family connection —will this be the case that breaks Detective Jackson?

When Gina wakes up from a two-year coma, she realizes someone tried to kill her and make it look like suicide. Detective-in-training Lara Evans is assigned the case, but when she discovers who the main suspect is, she fears she’s in way over her head. Meanwhile Detective Jackson learns the man in prison for murdering his parents is innocent of the crime and another officer coerced the detainee into a confession. As the two investigators work the cold files, members of their own department come under suspicion and their cases begin to overlap. Can they find the killers before the crimes of the past explode in the present?

Gina opened her eyes, taking in the white blanket and blue-scrub nurse. Her first thought was: This is a hospital. Her second thought was: Someone tried to kill me. She wanted to speak but her throat was dry. “Water, please,” she managed to say, sounding weak and scratchy.

The nurse jumped, eyes popping open in surprise. She fumbled in her pocket for a cell phone and ran from the room. Gina wanted to call after her but she had no strength. She’d been half-awake off and on for what seemed like weeks, but this was the first time someone was in the room when she had the clarity and strength to speak. How long had she been in the hospital?

The nurse returned after a few minutes with more medical people—a woman in a white doctor’s coat and a man in a suit. The nurse offered Gina some water, and the woman in white said, “I’m Dr. Ellison. Do you know where you are?”

“Not exactly.” The doctor smiled gently.

A wave of apprehension rolled over Gina.

“This is a long-term care facility.”

Dread seeped into her fragile bones. “How long have I been here?”

Two years? Gina closed her eyes. No. This was just another strange dream. She’d had a lot of unpleasant dreams lately.

The voice sounded real. The blanket between her fingers felt soft, textured, and real. The feeding tube in her belly ached with real pain. Gina opened her eyes again. “Two years?” She remembered being forty-four. That would make her forty-six now.

“I know this is difficult to process, but the important thing is that you survived. And now you’re awake.” The doctor kept smiling.

A terrifying memory flooded Gina’s senses, making her heart pound. The masked man had been in her dreams sometimes, but this was different. Gina practiced the words in her head first, then struggled to say, “He tried to kill me.”

The group at her beside registered a collective look of surprise, followed by disbelief. Again, the doctor was the first to speak. “Your file says you took an overdose of Valium and Demerol. Do you remember that?”

“No.” Gina shook her head. Her brain felt fuzzy, as if she were about to drift off, but she desperately wanted to say something. “I was attacked.”

The medical people looked at each other, puzzled. The man in the suit said, “There’s no record of that in your file.”

The nurse gently touched Gina’s arm. “Would you like me to call the police?”

Gina would have laughed but she didn’t have the energy. Two years had passed and the bastard would likely get away with it. Was anything left of her life out there? Despair washed over her and she fought back tears. “Yes. Call the cops.”

The man in the suit followed, saying, “Let’s keep this low-key.”

Gina fought to stay awake. She’d been asleep for so long. Yet a wave of fog rolled over her and she drifted. Before she went under again, a small piece of her life before this room bubbled to the surface. She’d been compiling evidence against her soon-to-be-ex-husband. What had happened to her notebook?http://ljsellers.com/