How To Get A Literary Agent (In Two Murders or Less) 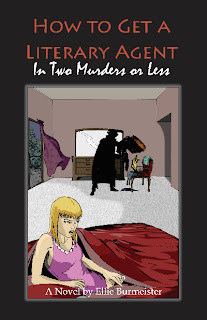 HOW TO GET A LITERARY AGENT
(In Two Murders of Less)
by Ellie Burmeister http://www.mirthpress.com/

Aspiring novelist Amanda Anderson has never had any luck, but she hopes that's about to change. She goes to a writer's conference to find an agent, but ends up with a husband. After a whirlwind courtship, she elopes with bestselling suspense writer Jonny Goodsnuff. But she soon discovers that her husband's only good on paper. Between a draconian prenup, his sleazy associates, her wicked stepchildren, and the hunky romance-novelist neighbor, Amanda learns the meaning of "wed in haste, repent at leisure."

Unfortunately Jonny has a deadly secret, and before she can walk away, Amanda finds herself in a desperate game of cat and mouse. But who are the cats? And who are the mice? And most importantly, will any of this bring her closer to a publishing contract?

The title should be available from Amazon by the end of the month.

I must have drifted off to sleep, because I woke to the sound of footsteps. I sat up, intending to give Jonny a lecture for staying out so late, but then sank back down with my heart in my throat when I realized that the man in the room with me wasn’t my husband.


The intruder was wearing a hat and an expensive looking trench coat. Thankfully, he had his back to me, but even so, I saw that his frame was too tall and too thin to be that of Jonny Goodsnuff. He ran his gloved hands over the surface of the desk, knocking the few small items to the floor. One of Jonny’s Scotch glasses fell on something else with a shatter. The intruder spun to face me.

I lay as still as I could, pretending to be asleep, and I watched him through my lashes. A heavy scarf obscured the bottom half of his face so I could only see his eyes. He stood there and looked at me for about ten seconds before he turned around again and reached for my suitcase. In an instant, he had it open, and was shaking out its contents. My exorbitantly expensive dress slithered out onto the floor, but I didn’t care. There was nothing in that suitcase that was worth more than my life. As he reached for Jonny’s suitcase and fumbled with the clasp, I decided I’d make a run for it.

No sooner had I raised myself up than the intruder spun around and pulled the scarf from his face.

“No, please, don’t bother getting out of bed.”

I froze, frightened out of my wits. I tried to scream, but my throat wouldn’t work. My heart was beating so hard that I could feel it bruising my ribcage.

“This will only take a minute. I’ll take what I need, and then I’ll let you get back to sleep.”

I sank down into the bed and cowered while the intruder resumed pillaging our belongings. He’d showed me his face. That meant he was going to kill me. First, I’d be subjected to God knows what. I could just imagine the headlines back home: Local Girl Makes Good – Only to be Brutally Murdered by Hotel Room Rapist.

Suddenly he stopped and turned to the door. I could hear Jonny humming a tune as the doorknob began to turn. The intruder’s eyes narrowed and his right hand clenched into a fist.

I summoned my nerve for one last act of heroism.

The door burst open and Jonny leapt into the room with his arms spread wide. “Stonewall, my man. Come over here and give Jonny some love.”