A Wedding to Die For by Heather Haven 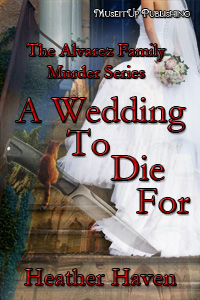 A groom arrested for murder can put a crimp in any bride’s wedding. So when the wedding of Lee’s best friend is threatened by the arrest of the groom for murder, thirty-four-year old Lee Alvarez -- a combination of Sue Grafton’s Kinsey Millhone and Janet Evanovitch’s Stephanie Plum - heads to Mexico in search of the real killer. While there, the half Latina, half WASP, and 100% detective finds herself embroiled in a network of thieves who specialize in plundered Mesoamerican relics. Never mind, she’s eating the best tasting tamales ever. With the help of the rest of the Alvarez Family, Never-Had-A-Bad-Hair-Day blueblood mother, Lila Hamilton Alvarez, brother and computer genius, Richard; favorite uncle, “Tío” Mateo; and Tugger, her energetic orange and white cat; Lee manages to stumble across a few more dead bodies. Ole!

But when she smacks right into the man of her dreams, she has to ask herself, is he too good to be true? Probably. So Lee tries to follow her own sage advice, ‘when Cupid’s wings start flapping, take cover.’ Good luck to her.

A Wedding To Die For is the second novel in a series of humorous murder mysteries involving the Alvarez Family, owners of Silicon Valley’s successful Discretionary Inquiries.

Heather is a story teller by nature and loves the written word.  In her career, she’s written short stories, novels, comedy acts, plays, television treatments, ad copy, commercials, and even ghost-wrote a book.

One of her first jobs as a writer was given to her by her then agent. It was that of writing a love story for a book published by Bantam called Moments of Love. She had a deadline of one week and then promptly came down with the flu. She wrote "The Sands of Time" with a temperature of 102 and delivered some pretty hot stuff because of it. Later on, she wrote short comedy skits for nightclub acts and ad copy for such places as No Soap Radio, where her love for comedy blossomed. Many of her short stories have been seen in various publications, as well as 2 one-act plays produced in Manhattan.

“Allied Arts is renting us the restaurant for the reception, including the outside patios, from five-thirty to eleven-thirty p.m. Do you think ten cases of champagne, plus five cases each of Chardonnay and a Napa cab are enough?”

“That sounds more than sufficient. What else?”

I started counting off items on my fingers. “Bridal shower, next week. Richard is in charge of the bachelor party. The tuxes are ordered. The gowns arrive this afternoon, and I have two seamstresses set up for the fittings. I haven’t seen a picture or rendering of the designs yet, but I’ll bet they’re incredible. Mr. McFadden designed them himself, something he hasn’t done for years. He said he chose a ‘theme,’ which reminds me, I’ll have to get samples of the fabric to the florist. Don’t you own one or two of Warren McFadden’s dresses?”

“No. I find him a little avant-garde, Liana,” Mom said.

“I think they call it cutting-edge now, Mom,” I corrected.

“If you say so.” She smiled and changed the subject. “Did you find a photographer?”

“Yes, finally. I thought I was going to have to buy a camera and take pictures, myself.”

“Did you know the reason the wedding got canceled that was supposed to take place at Mem Chu was because the bride came out of the closet and is now living in San Francisco with her lover, Charlene?”

“Oh. Well, anyway, this guy was supposed to be their photographer, so he was available. I’ve seen his portfolio. He’s good.”

“That sounds fine,” Lila said, somewhat mollified. “What about the rehearsal dinner?

Didn’t John offer to take care of that part of the festivities?”

“Originally, but he had to bow out due to a heavy work schedule.”

“Yes,” I said and nothing more. My latest love had been pulling back big-time on a lot of things, but I didn’t want to admit it or deal with it yet.

“However, Carlos took over and got us a private room at the new Japanese steakhouse for after we go through our paces.”

I looked at the tattered list again with all the checkmarks indicating completion and would have done cartwheels around the room if I hadn’t been so tired.

“Mom, I think I’ve done it. After I order the flowers and take care of the fittings, I’m done,” I said with pride. “This wedding is completely done and Good-to-Go.”

Five hours later, I stood in front of a mirror, enveloped in what felt like eighty yards of a chartreuse moiré taffeta laughingly called “Whipped Lime.” Between the starched crinoline underskirt, ruffled hem of the overskirt, and tufted bodice, all in a hideous yellow-green, I looked like a New Year’s Eve float depicting baby poo.

And in moiré taffeta. When Mom called his work avant-garde, she was being kind.

The phone rang, but I was afraid to move. On top of how I looked, any movement sounded like leaves trapped in a wind tunnel. No wonder no one wore taffeta anymore, I thought. Noise pollution. One of the seamstresses answered the phone and slapped it into my frozen hand.

“Lee, it’s me. We need your help,” Mira said. Her voice sounded frantic and as if she’d been crying.

“No, I’m not,” she sobbed. “Carlos is being arrested for murder.”

“What?” I said, sinking straight to the floor, buried in a mound of taffeta. “Carlos is being arrested for murder?”

“Yes, they say he murdered the thief who broke into our apartment last night. They’re taking him away,” she wailed.

“Wait a minute. What thief? What murder? Mira, what’s going on?”

She tried to tell me, but between the hysteria, coughing, and wheezing, I couldn’t understand her.

“Never mind,” I interrupted. “Hold tight. I’ll be right there.”

I struggled to my feet and thought, with the groom arrested for murder maybe this Good-to-Go wedding just Got Up and Went.