Beside Myself by Ginger Simpson 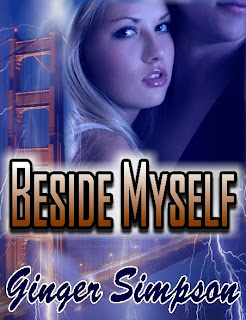 BESIDE MYSELF
by Ginger Simpson
See her books on MuseItUp Publishing
Read her blog at: http://mizging.blogspot.com/
Follow her on Face Book at: http://facebook.com/mizging

Buy the book at the Writers Exchange or Amazon

Someone is killing women in Cynthia’s neighborhood, and they all bear a striking resemblance to her.

Fresh from the Midwest, Cynthia Freitas discovers her budget stretched thinner than she expected. An apartment in a run-down tenement is all she can afford. To top things off, a serial killer is stalking her neighborhood, and the victims all bear a striking resemblance to her. One bright spot is the handsome policeman who lives next door. An innocent kiss after sharing dinner together deals them both a striking jolt. Getting back to normal takes a backseat to Cynthia saving Alex before he becomes the killer’s next victim.

He sat alone in his dim apartment and thought about what he'd done. The tattereddrapery blocked out society and created the perfect ambiance for his dark mood. Hiscurtains were never open; instead he kept the floor lamp in the corner turned down low.

In his mind, he tightened the electrical cord over and over, choking the last breathfrom each of his victims. Momentarily, he warmed at the thought, and then in a flashof sanity, supposed he should feel bad - but he didn't. His lips curled in the feral smilehe'd seen so often in the mirror, and a feeling of power swept over him. For now, thehunger was sated.

His memory replayed the crimes. His victims all had it coming - every one of them.They shouldn't have fought. He only wanted to show them love, but they wouldn't le thim. He scowled. Filthy women--they play with a man's emotions and eventually destroy his ego and break his heart--and for what? He snorted. To move on and do it again to someone else?

His fist tightened, reveling in his quest to end man's suffering. Each of his victims begged for mercy, but he had none to spare. The red tip of his cigarette glowed brighter as he inhaled. Safe in his comfort zone, he relaxed. No one would ever suspect him.

He passed potential victims every day--coming and going as he pleased. Whether they lived or died all depended on how he felt at the moment. He emptied his lungs, filling the air with acrid smoke.

Meeting women had always been problematic. He either wasn't tall enough or didn't have the good looks they preferred. But, things seemed right when he had first met her. She acted different from the others, or so he'd thought. Memories caused his calloused fingers to ache, wanting to splay through her soft, blonde hair as he had when they'd made love in the past. His lips still hungered for her kisses. She'd been very convincing--accepting him, welcoming his attentions, and sharing his bed. But, it had all been a farce.

The ancient wood beneath the chair's upholstered arm splintered beneath the pounding of his fist. Some days he put it all behind him, forcing the hurt and anger from his mind and trying to live a normal life. He didn't really want to hurt anyone, but there were days- -dark haunting days--when her mocking laughter taunted him, and visions of her cold, blue eyes burned a hole in his heart. Her downfall had been hurting him like she did.

If he couldn't have her, no man would. He started to rise, but his simmering anger boiled. His fingernails painfully embedded themselves in his palms and he dropped back into the seat.