Duty and Devotion by A. R. Norris 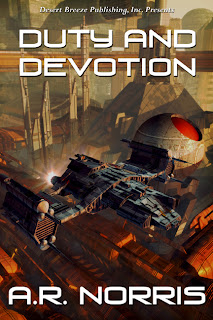 DUTY AND DEVOTION
By Amber (A.R.) Norris
Buy it at Desert Breeze Press

Note: I invited Amber to my blog months ago before I started Magical Mystery Month. Her book is SFR, not mystery, but still a damned good read. What a cool cover! MGD
(Q) Thank you for joining us today, Amber. Before we begin, please tell our readers where they can find you.

(A) Thank you so much, Marva, for having me on your funky blog today. You can find me at my blog
http://sci-fiadventures.blogspot.com/ or my Author's Den page http://www.authorsden.com/arnorris.

(Q) Now, why don't you tell everyone a bit about your books including buy links?
(A) Well, my debut novel, Duty and Devotion, is due out June 15th with Desert Breeze Publishing. It's a science fiction romance about two sisters drafted into war. The story takes us through their training and the very different paths they each go down. Nettie, the older one becomes a space fighter pilot while the younger sister, Rinny, is training to become a ground combat soldier. Both sisters find out what it really means to live in a time of war and fight for freedom. Nettie's pain and loss close her heart to anything but her duty, but Officer James Northman is focused on opening her heart again to see the happiness even in chaotic times. Rinny finds love and devotion right off the bat in Danny Gubvre, but learns war is a fickle beast when it rips it away as she's captured by the enemy. Now she's fighting to keep her people free, return home, and just maybe find her lost love.

(Q) Where did the concept for the book (or books) come about?

(A) That's is a good question and it boils down to the fact people cannot take restraining orders out on fictional characters. (The police look at you strangely.) Rinny's story came to me first, in a dream. She then stalked me for months before I laid out the story on then paper and pen in a spiral bound notebook. As I began her story I started dreaming about Nettie. At first, I didn't know they were related or sharing the same storyline. That smacked me in the face about halfway through Rinny's rough draft.

(A) I'm ashamed to say it took me almost two decades to complete Duty and Devotion. Not ashamed because the time, but because the reasons behind the time. I doubted my ability, and then allowed what I thought life was supposed to be get in the way. After a dose of reality from my husband, who reminded me the importance of following dreams, I got myself whipped back into shape and heading towards publication.

(Q) Are there any authors that have influenced your own writing?

(A) Oh, wow! Lots of authors. I guess I simmer it down to Isaac Asimov, H.G. Wells, and Edgar Allan Poe. They were big influencers, each for different reasons.

(A) In the middle of the night. On my walks. While I'm relaxing in the backyard. I guess it boils down to when I'm not actively thinking about writing and my mind/muse wanders into a creative walkabout. Then it's a flurry of typing away to keep up and characters yelling at me to hurry.

(Q) As a writer, what is your greatest fear?

(A) Reader apathy. I want readers to either love it or hate. I dread the words, "It was okay."

(A) Ah, yes, well...I guess you could say noise, chaos, and constant distractions occupy my writing space. I work primarily on my laptop where ever I can find a semi-quiet place. With a hubby, 2 teenagers, 2 toddlers, and 2 dogs...it's difficult.

(A) Oh yes! I'm so excited with my current project. It's a SFR series titled The Telomere Trilogy. Here's my blurb for the first in the series, Revelations of Tomorrow which releases in October:

The crew of Daring Star salvage a load capsule and find the beaten body of Jetta McCree. Turns out Jetta's discovered her employer has developed a biochemical droplet and is contracted with terrorists to manufacture it on a large scale. Captain Noah Bonney fights off corporate security forces, her ex-husband's pirate fleets, and carnivorous beasts to keep the young woman safe and transport her to the safety of the Imperial Home Port. But the adventure brings to surface demons Noah's been suppressing and secrets from her people's history she's tried to forget. Now, she must face them if she's to reconcile with her daughter and keep the love of her life from leaving. With 450 years under her belt and nothing but eternity ahead of her, she's built a thick shell…one she's not sure she can break.

(Q) What tip would you offer to a new writer who is just beginning their submission journey?

(A) Research, research, and more research. The publishing industry is so vast and complex I urge every new author to be patient, learn as much as you can about all the various paths to publication and find one that fits your goals, expectations, and personality.

(Q) If you'd like to add anything, please do so.

(A) Nope, I think I'm good. Thank you so much, again, for having me today.

(Q) How about an excerpt to tantalize the readers?

No problemo! Here's one from Duty and Devotion:

The Lieutenant's training assistant, Sergeant Nowell, followed his chin tap with a quick kick to Rinny's gut, then a side jab into her ribs. Rinny folded like a rag doll, landing hard on the fighting mat. Lying rumpled, her side and jaw throbbing, she heaved for breath. The room swirled like a roller coaster ride. Sweat dripped into her eyes, stung them.

The Lieutenant continued to instruct from the side. "Don't think your height is always going to compensate. It can be a weakness against a skilled opponent."

Sergeant Nowell circled her, rolled his shoulders, and prepared for victory. Struggling to her hands and knees, Rinny tracked him through the dizzy haze, waiting for the right moment. Thinking beyond the pain, she shut down her body's reaction to it and pushed up her adrenaline. Rinny focused her mind and prepped her body for action.

Sergeant Nowell continued to circle, pleased with himself. "Come on, Legs. Get up."

The recruits around the mat taunted along with him. "Up!" they chanted in the background, clapping their hands in unison.

As he circled by her left leg, she tripped him, then brought up her right leg to finish toppling him over. He hit the mat with a hard thud. She followed through, flipping over and on him to press her elbow into his windpipe. She grinned over at the Lieutenant.

"Yeah, but so often the height and legs is such an asset." Rinny added further pressure to the Sergeant's throat to emphasize the point.

Her fellow recruits cheered and whistled as the Lieutenant laughed and called the win. Rinny helped the Sergeant up, beaming.

"That is true. Unfortunately for you, however, unlike Nowell here, Union soldiers make up for their shortness in chest bulk and wider stance. Their balance is impeccable and their upper body strength is twice that of yours." He scanned the class. "Even more unfortunate for you, Union soldiers are bred off a physical code of conduct. They do not get promoted by time served. They are promoted by challenging the next up. If they win, they promote. If they lose, they die or are exiled from the militia in shame."

Rinny cast her eyes down, thoroughly put in her place.

Rinny took steps to leave, but Sergeant Nowell caught her arm. He glanced to where Lieutenant Mooring walked away, then winked and patted her shoulder. "Good job, Matterville." He rubbed his throat and rolled his shoulder. "Very good job."