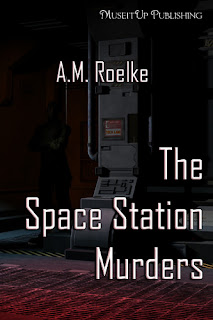 The Space Station Murders
A grieving ex-cop. A crowded space station. A killer on the loose.

Herb Molloy went so far downhill after his partner died that he’s now an ex-cop living under one of the space station’s artificial beautification bridges.

Into his barely getting by life comes trouble and friendship. Trouble in the form of murders on the space station—his fellow homeless people targeted, picked off one by one. Friendship in the form of station newbie Zack Ives, who doesn’t know enough to look after himself yet... and who wants to investigate the murders.

Herb reluctantly agrees to help him, and the two step into danger’s path to solve... The Space Station Murders.

A long, loping run took Herbert to the fracas. Three thugs—the Jensen brothers—wailing on a smaller guy, curly hair. He was giving as good as he got, but with three to one, the odds were obvious.

Herb slammed a fist into the eldest Jensen’s ribs, hooked a leg around his, and pulled him down. Trod over him and tackled the next guy in the pack, the biggest Jensen, leaving Curly with only one opponent. Curly, breathing hard, trying not to double over, blew on his fists, rocked side to side, and clocked his opponent a left hook.

Herb smashed the giant’s face a few times, dodged the return blows; he was too fast for the giant’s fists, so the giant lunged forward to tackle him. He sidestepped and caught the guy from behind, jumping on his back. They both toppled to the floor. By the time he’d gotten loose, the oldest Jensen was getting up, the one Curly had been fighting was down, and both Curly and his opponent had a busted lip.

“Molloy,” growled the biggest Jensen, picking up a pipe hidden beneath the park bench and smacking it into his palm. He advanced on Herb, murder in his eyes.

The kid kicked the approaching thug in the back of his knees and took off running, scuffed sneaker soles flashing behind him. He ran all out, the way he’d fought; Herb was behind him the whole way, even when he put on a burst of speed.

They stopped three streets down, leaned against a shop wall (Spaceship Repairs), and panted. “Thanks,” said the kid, doubled over, holding his side. He spat phlegm in the alley, stood up, and offered his hand.

Herb looked at it a second, took it. Most street folks didn’t offer to shake hands.

“Herb Molloy.” He eyed the kid, who wasn’t as small as he’d looked fighting the Jensens. He was almost Herb’s height and not as young as Herb first thought. Ives moved with youthful energy, but the lines around his eyes said he was probably closer to Herb’s age.

He wore ratty jeans, blue sneakers, and a flannel shirt that had seen better days. His eyes flashed dark blue, and his hair was the unruly kind that curls naturally, getting bigger and bigger if you didn’t do some serious pruning. He hadn’t for a while. His tanned, olive skin and his accent marked him as someone from a planet, not a native space rat.

“You new to the station?” said Herb, drawing back from the firm handshake.

“Yeah. What’s it to you?” The kid drew back too, eyes narrowing as if he wanted another fight.

“If you weren’t, you’d know to stay away from that bench. That’s Jensen territory after 1200.”

“I was,” said Herb, wondering at the kid’s nerve. “Come on, I’ll show you a place where the homeless aren’t quite so territorial.” He turned; with loping steps, he headed toward the bridge.