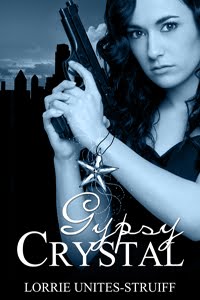 Rita Muldova is a homicide detective in Keyport, PA. A serial killer is on the loose in her town and targeting prostitutes. But Rita has an edge. She wears a mystical crystal amulet that has been handed down through her Roma maternal bloodline that allows her to see, in the dead victim's eyes, the last face they had seen.

But now, the crystal has quit working. Is the magic gone?

Matt Boulet, a special FBI agent has been following the killer's trail from New Orleans. He has a personal score to settle and holds back secrets from Rita and the task force.

There is a magnetic pull between Rita and Matt, an attraction they can't deny. And too many secrets are kept by both, plus Rita's family.

When all the secrets are finally revealed, Rita swims through a whirlpool of shock, horror and confusion. Her renewed determination to put an end to the killing spree spells danger ahead for all involved.

Detective Rita Moldova peeked around the corner to make sure the hallway was empty. Making a quick right turn, she slipped into the autopsy lab to have a few minutes alone with the body. She tucked her white shirt tighter into her jeans and zipped her windbreaker to stay warm in the chilly room. The harsh odor of formaldehyde hit her nostrils and stung her throat.

Her heart twisted at the sight of the young, auburn-haired woman lying on the stainless steel table. A white sheet covered her to the navel; bruises blemished the once pretty face. Contusions marred the pallid skin from elbow to shoulder. The gash on the front of her neck gaped, exposing open veins and torn tissue.

Rita flipped her thick, dark braid back over her shoulder, snapped on one latex glove, leaned over the corpse, and peeled back an eyelid. In her bare hand, she clasped a star-shaped crystal hanging from the gold chain around her neck, an endowment from her maternal Roma bloodline. The crystal heated in her palm, warm energy pulsing up her arm to her shoulder. The face captured in the victim’s eye coalesced and stared back. Rita drew in a sharp breath. Bobby Driscoll! She had known him since high school, and now he worked as a uniform in her precinct. What the hell was going on?