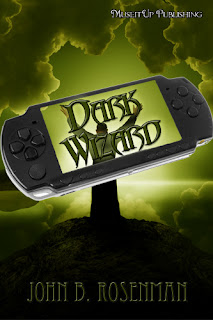 NOTE: Go to John's website to win a free copy of his book.

Read an interview at
http://www.milscifi.com/archives/arc-JohnBRosenman.htm
For those who like shortcuts, don’t read the first few pages then skip to the end. This is one book where every chapter counts. I recommend this to anyone who likes a good science fiction thriller. - Ron Berry, UnWriter Reviewer
Blurb

Kan not only has complete amnesia but superhuman strength and the ability to bring back the dead. Soon a beautiful girl complicates things even more, and he learns he is faced with a deadly evil and a cosmic mission. To survive, he must solve three mysteries. He must remember who he is, what happened to make him forget his past, and above all, the identity of the Dark Wizard who endangers the Earth.

Jean-Pierre’s blood froze. Before he could ask what Birdwell meant, the little man stiffened and jabbed his finger at the road ahead. “Uh-oh, I was afraid of this.”

Two hundred yards away, a roadblock waited. Even from his seat, Jean-Pierre could make out clustered cars and a barricade.

“What are you going to do?”

Birdwell grinned and tapped the wheel. “I believe on your world, you have a saying. The show must go on.”

‘The show must go on’? What the hell are you talking about?” He pointed. “If you try to ram them, you’ll get us both killed.” He twisted in the safety web and peered behind him. Several cars followed in hot pursuit less than a hundred yards behind. “They’re right behind us. If you stop, they’ll catch us!”

Birdwell’s grin widened. “Oh no, my jolly Frenchman.” He cackled and pressed a stud on the wheel. “Hold on to your chapeau!”

The roadblock was less than a hundred yards away, and Jean-Pierre began to pray when he felt the car leave the ground. It rose above the barricade, and he looked down in time to see startled faces turn to watch them in disbelief—disbelief that mirrored his own. When he turned back, they were already a hundred feet up, sailing toward the mountains. A flock of birds flew past, just missing them.

Birdwell whooped. “Sacre bleu! You ought to see what this baby will do in second gear.”