Another Way by Nancy Gaffney 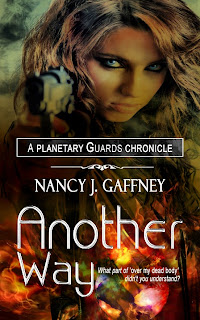 ANOTHER WAY
What part of 'over my dead body' didn't you understand?

Bio: Nancy J. Gaffney lives on Martha’s Vineyard with her boyfriend, laptop and an imagination that keeps her pecking at her keyboard, until the small hours of the morning. She loves exchanging e-mails with readers and authors, and writing stories with fabulous, flawed, female leads and really bad weather? thunder, lightning, the fiercer the better.

Description:
A thousand years ago, in the name of ‘the greater good’, a great betrayal occurred. In the name of righteous retribution and justifiable genocide, a peaceful planet is attacked. A civilization a thousand years in the re-building is razed. An idyllic society, steeped in music, literature, and civic duty, is forced to flee the only home they’ve ever known. In middle of the struggle for survival, Shannen ‘Keeper’ Everett, Jason ‘Preacher’ Carrack and Colonel Robert Preyar must find a way to stay alive and thwart enemies no one ever knew existed. The battle for life as they knew it is on.

Excerpt:
Jason heard Shannen’s request for him to switch to gamma frequency. He didn’t have to ask his Navigator to give him privacy. Whatever they were going to say would stay just between the two of them.

“Jason?” Shannen – not Keeper – was on the other end of the comms.

“I’m here, Shannen.” Jason – not Captain Preyar or Preacher – answered her. “No chance of some mind-numbing plan taking shape in that brain of yours?”

“Funny you should ask that – I was going to ask you the same thing.” Shannen replied. “Got any super-secret maneuvers hidden up your sleeve?”

They both knew that this was how it could end, but for some reason a sense of disbelief and unpreparedness had them both rattled.

“I don’t know how to say this to you.” The honest tremble in her voice was different from the voice she used to convey the end game they faced.

It wasn’t a cop out and this wasn’t the time for flowery speeches. This was it and they both knew it.

Hearing her swallow, her next words made his eyes sting.

“If you see Jesse before I do, let him know I won’t be long, okay?”

“Done; the same goes for you, you know.” Jason couldn’t keep the thickness out of his voice.

“Not a chance, Carrack. I’ll wait for you, if that’s the case. I think I like the idea of exploring the Elysian Fields with you for the next eternity or so. Jesse can find us if that’s going to be the case.”

Jason could feel the sincerity in Shannen’s promise.

“Forever never sounded so good, Shannen.” Jason offered his own promise. “We’ll find Uncle Bob while we’re at it.”

Jason smiled weakly. Dying didn’t seem so bad knowing that Jesse, his mom, his dad, his uncle and Shannen were going to be waiting for him on the other side. Not to mention sending an Ark full of war-mongers to the deepest bowels of Tartarus as a post-script on a set of service records only the stars would bear witness too.

“Can’t wipe your eyes with a helmet on, can you Lieutenant?” Preacher deliberately broke the moment. They had a job to do and, afterward, a family reunion to attend.

Her voice might have cracked as she stumbled over the word “Captain”, but Keeper’s bravado carried across to CentralOps when she switched back to the attack frequency.

“Senator’s Son – Alpha; do what you can and leave the Ark and Cardinal to us. I’m invoking Blood Rights. Their asses belong to us.”