In a sub-genre of Urban, Epic, Chosen One, Quest, Paranormal, Euro-centric, Contemporary, Otherworldly

When the main character is non-human or half-n-half (like coffee creamer).

And the secondary character is a hot human, non-human, or half-n-half.

And the villain is an insane, megalomaniacal, just-plain-evil, human, non-human, or half-n-half.

When the list is complete, look it over and write some kind of fantasy that does not fit in ALL of the lists above. That is each instance when your fantasy has a different item than those listed above, you score 0 trope points. Score 1/2 or 1 trope point for those that match or pretty closely match.

Provide the title, author, and a link with the Trope Score in a comment.

Can we come up with even one absolutely unique fantasy book?

I'll give this a stab with Setara's Genie:

Subgenre: It's closest to Quest, but since there aren't any quests for magical items or imprisoned princesses, I'll have to call my subgenre silly. Still, given the legendary status of 1001 Arabian Nights, I'm going to have to score 1 trope point.

Main Character: Setara's a plain old human being with no magical powers of her own. She's a lucky gal, though, to have a lot of magical friends, but that won't count in the MC category. Yea! No trope point here. 0 trope points. 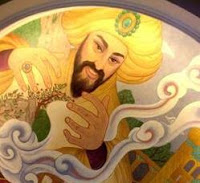 Secondary Character: Basit is a full-fledged genie, which has been used, but I don't think it's reached the trope status. I'd say 1/2 trope point since genies are fairly rare secondary characters. More likely, they're a villain since that's what they are in mythological terms. Other secondaries include demons, flying horses, a historical figure, and a merboy, I'll take that extra 1/2 point. 1 trope point.

Villain: There are several villains, but other than a bunch of pirates, the only real villainous villain is another genie. He is really evil, however, so score 1 trope point.

How does your fantasy rank?