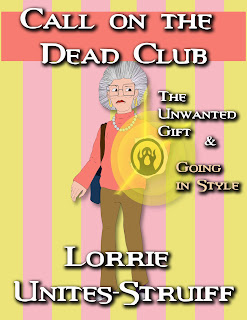 The Call on the Dead Club series with BTGN (http://www.bookstogonow.com/).


Story 1&2 will be included in the first book.

Come and meet Winnie Krapski who hugged a cherry tree during a lightning storm. The bolt slammed her, splitting the tree in half. The near-death experience bestowed her with a gift–one she’d rather not have.

Drafted into the C.O.D. Club (Call on the Dead) by Fat Phil Phillips, her mission is to grant the newly deceased’s ghost one last reasonable request. Can Winnie honor her oath?

Well, she tries, but not before she lands in humorous situations that almost get her killed. She’s one spunky broad.

I hope you try a copy and look forward to more of Winnie’s adventures.

Release date coming soon. Just get ready to laff your ass off.

A  Heap of Trouble


Cole Walker, Sheriff of Cold Creek, has more woes than he can handle.  He thought chasing rustlers would be the worst of his problems, until the newly arrived, Mattie Wells, jingles his spurs with a smile, and he falls head over heels for her.

Cole's fear of critters comes to light when a runaway monkey named Beggar takes a liking to him. He remembers when his pa's hound dog left teeth marks on his butt when he was just a tyke.

But, Mattie thinks Beggar’s adorable, so what’s a man supposed to do? Now, he’s forced to put up with the little fur ball...uh...ringtail monkey even when the furry thief starts stealing the townsfolk’s trinkets.

The rustlers roaming the hills, stealing the Double J’s cattle are a mighty puzzling crew. JJ blames the farmers and an all out war is in the making.

Trying to keep the peace between the farmers and the cattleman, Cole and his deputies, Wade and Sully, have their hands full. Mayor Farley gives them a month to find the thieves before calling for outside help.
Mattie has a dark secret and vows never to marry. While harboring a secret of his own, Cole pushes to pry out her secret in hopes of changing her mind.

Cole chases Mattie, the rustlers, and Beggar in a town full of fun characters and chaos.

Can he bring the rustlers to justice, peace and order to Cold Creek, the townsfolk’s loot back to their rightful owners, and win Mattie’s heart?

Yep. Cole has a heap of trouble on his hands.


For more information on my stories, please go to http://struiff.wordpress.com/cod-club-series/

Ya’ll have a great day now and thanks for reading.

Email ThisBlogThis!Share to TwitterShare to FacebookShare to Pinterest
Labels: A Heap of Trouble, Call on the Dead Club, Lorrie Struiff, MuseItUp Publishing