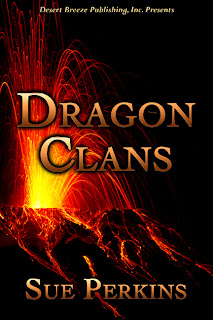 Thank you to Marva for her kind invitation to post on her blog.

My latest release is 'Dragon Clans' the second book in the Dragon series. Sie, a human girl, is rescued from the sea by a red dragon. She is welcomed into the dragon clan and makes friends with a young female dragon called Essie. I'm delighted to say Essie has agreed to come along with me today and tell us about her friendship with Sie.

E: I'm happy to visit. Do you mind if I ask a question? What exactly is a blog tour?

A blog is a series of visits to different blogs usually to talk about book releases or other matters of interest. When did you first meet Sie?

E: I heard her before I saw her. She sent out a plea for help and I heard her in my mind. I convinced our leader Toldar he should go and find her. He rescued her and Benare, our healer, gave her into my care.

Wasn't she scared when she found herself surrounded by huge dragons?

E: I think she was at first, but she soon recovered and we became sisters.

E: Yes. First we became good friends as I showed her how we did things in the Valdra Clan. We decided as neither of us had any family left, we wanted to be sisters. The clan approved and Sie was accepted into the clan.

I understand there was a problem with some of the other clans.

E: Yes, but it was more a misunderstanding. With Sie and Byron's help we were able to sort it all out.

E: He's a human who is friends with the Mondra Clan. I think Sie's a bit sweet on him.

And do you have any particular dragon you're interested in.

E: [Suddenly shy] I'd rather not say. I think I should go now. Sie will be worried if I'm away too long.

Well thanks for visiting Essie, it was lovely to meet you.

If you want to find out more about Essie and Sie here is the buy link.

Don't forget to leave a comment and be in to win
an ebook of Dragon Clans at the end of the blog tour.

Essi. An orange dragon came forward when Benare called. This is the human you heard call for help. I am making you responsible for her. Find some warm clothing for her and feed her.

With a nod to Sie, the healer turned and moved away.

My name's Essi. The dragon sounded a bit shy. What should I call you?

Sit over here. Essi indicated a flat rock a short distance away. I'll bring you something to eat.

Visions of raw meat flicked through Sie's mind. What did dragons eat? Essi returned holding a flat rock. Several different fruits and an unusual cake sat on top of the rock, and the young dragon placed it beside Sie, then scrunched down on her back legs.

Eat. We can talk after you have food inside you.

Sie picked up some fruit and bit into it. The juices ran down her throat soothing a path through the soreness caused by swallowing sea water. She took a tentative bite of the cake. It tasted delicious. Made of fruit, it had been compressed and blended to make a cake texture. In moments it vanished.

You have finished? Come, we will find you something warm to wear. Essi led the way to some caves in the rocky walls of the valley. The large opening allowed light into the cave, and Essi began to rummage through piles of hides and skins.

Ah, here we are. The dragon held up a rectangle of thick fur against Sie's body then folded it in half down the narrow edge. With one of her sharp talons she slit the center at the top, leaving a small piece of fur at either end. When Essi offered her the skin, Sie looked at her in bewilderment. What did the dragon want her to do?

Pull it over your head.

"Oh." Sie pushed her head through the slit and found the fur hung from her shoulders to her knees. The flight to the dragon settlement had dried her clothes, and with this extra cover her body warmed up. Essi picked up a bigger fur skin and led the way to a small cave. Near the back Sie could see a heaped pile of animal furs and dried vegetation.

These are my sleeping quarters, Essi explained. You can sleep here for now. I'll be busy outside for a while. Use this as a cover.

The dragon handed Sie the larger fur. Clambering up on the bedding Sie pulled the covering over her and snuggled down.

"Thank you, Essi." A yawn stopped her saying anything further. Her eyelids drooped, and she fell asleep. 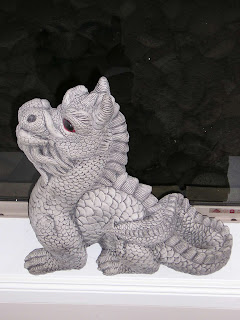